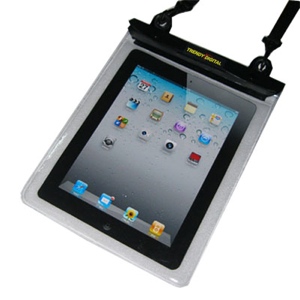 The WaterGuard enables iPad 2 owners to use the devices while they are in proximity to aqueous environments. The PadGear and Dimension series provides portable solutions for the second gen Apple tablet.

The front and back cameras of iPad demand accessibility to both lenses, while the iPad 2 is inside a case. WaterGuard waterproof cases have been redesigned to accommodate this camera feature. The transparent, camera-friendly material of the waterproof case yields clarity while photos are taken by the iPad 2 while it’s housed inside the case, according to the folks at TrendyDigital.

The PadGear Case for the iPad 2 is designed to protect the device from daily wear and scratches. There are two models for this series: the PadGear Lite ($37.99) and the PadGear Plus ($44.99), with Apple wireless keyboard compatible housing and a viewing stand. The Dimension series for iPad 2 is a further extension of TrendyDigital’s multi-position, multi-orientation viewing platform for the iPad. The Dimension includes both M Series and V Series. The M series uses amagnet as the attaching mechanism. The V series use industry strength Velcro band as the attaching mechanism.

The WaterGuard Waterproof Case Series features two models: the WaterGuard Lite ($23.49) and the WaterGuard Plus ($27). Both models feature TrendyDigital’s original double waterproof sealing closure, press-and-fold seal, and button fasteners. This multi-tier sealing mechanism provides protection when the iPad 2 owners use their gadget in an aqueous environment. The WaterGuard Plus version has padding for extra bump protection. What’s more, the padding has been customized for back camera access. T

The Dimension case ($44.99) incorporates several original designs elements to accommodate the most natural way for different users to interact with the iPad, according to the folks at TrendyDigital. From the outset, it looks like a slim and well-crafted jacket for iPad. The iPad is protected in a frame case at the right side of the jacket. The frame case has openings for all the access points in the iPad. Users can interact with the iPad in this jacket setting.