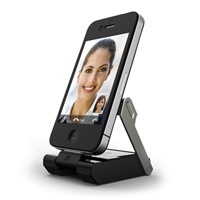 It’s also sports a hands-free stand and a short USB charging cable that’s okay for use with a laptop, but a bit too short for use with a desktop such as my iMac. It works with most cases — all that I tried, in fact, but your mileage may vary. An LED battery indicator light tells you how much power you have left.
Considering all the features it offers, the Kensington PowerLift Back-Up Battery and Dock is less chunky that you’d think. It folds into a small square that makes it easy to pack in a backpack or briefcase.

You can actually attach the PowerLift to your iPhone and let it hang off the bottom, though that’s a bit cumbersome. It looks and feels more natural to simply flip up the stand and sit it on a desk.

The 1200 mAh battery pack provides charging while the kickstand flips open to let you enjoy FaceTime chats and videos, which is a nice touch. It features two-position charging: in-line use for phone conversations and docking for charging, syncing and FaceTime -ing.

However, said battery pack, while not puny, doesn’t provide as much talk time as competing products, such as DigiPower’s $60 JumpStart Flip — though the Flip is a bit bigger. Also, the Kenginston product only works with devices that have an Apple Dock Connector. For me, that’s just fine, but you’ve been warned.

Besides the JumpStart Flip, there are other battery-only solutions out there such as the Mophie Juice Pack Air ($79.99) or Kensington’s own PowerGuard ($59.99). However, if you want a battery with reasonable juice that doubles as a dock/stand, the PowerGuard is worth checking out.