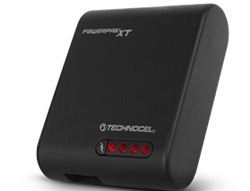 The US$59.99 Technocel PowerPak XT (http://technocel.com/) is a combination USB charger and external battery pack that I highly recommend as a great combination for anyone who travels and needs a little extra power boost now and then.

Because it has a USB port and a AC power plug, you can charge your iPhone (or iPad in “slow-charge “mode) and charge the device’s own battery at the same time.

Ironically, the device comes with a variety of USB adapters to charge mobile phones but not those made by Apple — you’ll have to bring your own cable for that.  The PowerPak has a 1600 mAh internal lithium ion battery that claims up to 4.5 hours of extra talk time. Actual
usage was consistent with this claim as my iPhone charge went up by 50% after the Technocel was drained.

The device is about the size of a Macbook charger (sans cables) and can easily fit into most pockets. It has a matte finish and curved edges making it powerful and visually pleasing (and won’t grind into your leg while in your pocket). Carrying an iPhone charge cable with you could be annoying though — I used the Scosche Flipsync portable charger to avoid this problem.

Technocel claims the device can hold its charge for a year. While I couldn’t test that, I did leave it fully charged and unplugged and still got the 50% increase in my iPhone 4’s battery when I plugged it into the PowerPak XT.

Four red LEDs indicate the current capacity left in the battery or whether the device is charging, depending on the situation. Knowing how much of a charge is left in the external battery is always helpful.

This is a smart design as it replaces the standard iPhone charger but also provides you a extended battery pack for just a bit more space and size. Because it’s a pass through USB charger, you can use it in a variety of combinations to charge other devices either with the included USB cables or those provided by the manufacturer.