The ‘iCar’ upgraded with iPad 2s 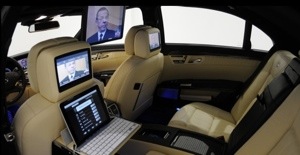 Brabus is the first company to develop an advanced car multimedia system based on the the second gen Apple tablet, the article add. The iPad 2 has been integrated in the rear compartment of the Brabus 800, a version of the V12-powered S-Klasse, which offers 800 horsepower. The iPad 2 has been linked to the car’s on-board entertainment system and allows the rear passengers to access all function of the S-Klasse in the rear of the car.

Thanks to its good built-in cameras, the iPad could also provide an excellent platform for video conferences, says “Autoevolution.” What’s more, Brabus technicians have created a custom table to which the tablet computers can be connected.

Mac mini Mini Mac located in the car’s trunk that serves as the central computer. The car also gets a 15.2-inch TFT display, which is mounted on the ceiling between the front seats, as well as with two screens mounted in the back of the front seats. Also installed is a 64GB iPod touch that can store more than 14,000 songs.