Icon Games Entertainment has announced Family Games for the iPhone and iPad. The US$1.99 app offers different multiplayer modes and game variations to choose from. Gamers can challenge their friends and family members to a tournament of skill and luck in games ranging from Dots to Hangman.

CashMap App founder and inventor Dennis Williams has released his iPad personal budgeting app called CashMap. The $19.99 app shows consumers how managing their average daily balance enables them to pay off debt, lower their borrowing costs and visualize their financial picture over the coming years.

Digiarty has launched PetsWar 1.0 for the iPhone, iPad and iPod touch. The $2.99 game charges players with assigning and matching an army of combat-ready pets to effectively resist the monster invaders. There are over 30 levels with 18 scenes.

Breek has introduced The Mystery Lab 1.0 for iOS devices. It’s a $0.99, original minesweeper game in which you must help the workers to clean up various areas. The Mystery Lab features unlimited levels and two game modes complete with Game Center integration.

Shalom Levytam has debuted Follows 1.0, an application for the iPhone and iPod touch that lets you track your online popularity. Use the Follows app to chart how many followers, friends, likes, subscriptions, connections or views you’ve accumulated across various social networks and services. Users can even provide a custom URL to Follows and have it track private data such as newsletter subscribers, comment counts, visitors, and more. Follows 1.0 is free. In-app purchases to remove advertising, track custom URLs, and save long-term historical data are available from within the app for $0.99 each.

QUByte Interactive has rolled out Plush Wars 1.0, a 3D-style tower defense game for the iPhone and iPad. In the game you help defend the castle, shooting down the gruesome yet fluffy ZomBears. Plush Wars features three worlds. The iPhone version costs $1.99, and the iPad version is $2.99.
Crumbs Bake Shop, “home of the original gourmet cupcake,” has cooked up its first iPhone app. The free app enables customers to enjoy interactive experiences, live news updates as well as purchase Crumbs’ gift certificates via a mobile coupon function.

Small Wonders has served up Yum Yum Boy 1.0, a $1.99 iPhone game based on a true story about a Internet guy who loves junk food and hates vegetables. Your goal in this game is to eat all the junk food you can to satisfy your gluttonous appetite while avoiding your mom — whose goal is to feed you with vegetables. Yum Yum Boy offers three different game modes with 40 puzzles.

The all-new Stock Trader’s Almanac 2011 App gives you historical market data for every trading day of 2011. It’s available on the iPhone, iPod touch, and iPad for $9.99 and contains all the data from the “StockTrader’s Almanac” book

Playrix Entertainment has brought Fishdom H2O: Hidden Odyssey HD and 4 Elements HD to the Apple App Store. Fishdom H2O: Hidden Odyssey takes players to the bottom of the sea to collect numerous hidden items to earn cash and build up their dream aquarium. 4 Elements is a mix of Match-3, hidden object and spot-the-difference where players need to unlock the four ancient books of magic and restore the magic kingdom to life.

Sysapps has unleashed Zombie Juggler 1.0 for the iPhone, iPod touch and iPad devices. In the $0.99 app, you have four buttons to control the zombie into four different positions that will allow you to catch the flying skulls. The skulls fly faster and faster and you must not allow any skull fall to the ground.

The DiningApp is a new, free restaurant guide for the entire Vail Valley and includes every dining style available. Just type in your breakfast, lunch or dinner favorites to instantly search a database of nearly 140 restaurants and browse through thousands of menu items. The titles are available for iPad in the App Stores worldwide at the introductory discounted price of $4.99.

Blue Onion Soft has created Bubble Dobby 1.0, a bubble shooting puzzle game for iPhone and iPad and iPod touch devices. Your mission in the game — on sale for $0.99 for a limited time — is to pop all bubbles before another bubbles Dobby passes you. Bubble Dobby has “infinite levels” of classic mode, 40 stages of puzzle mode, and a Battle Mode.

Mediaism is offering DeBug 1.0, a $0.99 math and reaction game for iOS. It features “fast paced game flow with a cute forest atmosphere challenging both the player’s arithmetic skill and reaction time.”

Pearson is presenting its new eText app for the iPad. The free app gives registered users of Pearson’s MyLabs/Mastering online homework and tutorial programs another option for accessing their companion eText.

Yi Wang has updated EventLoud 1.5.4 for the iPhone and iPod touch to version 1.5.4. The free social networking utility focuses on bringing people together to meet and interact at completely user-generated events wherever they want. The app has been newly updated to allow user to log-in using their Facebook account and preview events without logging in or even registering as a user.

Art Dynasty has announced an update to EroGlamour 2.0 for iOS devices. The $0.99 features a collection of famous photographers’ masterpieces from all over the world with constantly updated content arranged into four categories: glamour photos, celebrities’ photos, professional photos, and latest updates.

Soluble Apps today has updated MailShot, its email solution for iOS devices, to version 1.2. The free app allows iPhone and iPad users to email groups of up to 50 people from within their favorite apps just by selecting a single contact from their address book. These contacts can be used to email groups of family or friends, classes, work or sports teams.

Escape Velocity Apps has released Audiolio 1.4, an update to their $2.99 audio bookmarking, recording and note-taking app for the iPad. The app is designed for recording meeting minutes, annotating school lectures, interviews and more. You can bookmark locations in all of your audio, and associate notes and images with the bookmarks you create. You can use audio you record in the app itself or select items in your iPod library. Audiolio 1.4 adds Text Expander support.

Oren Meiri has released eWhiteboard 1.1 for the iPhone. The $1.99 urns any Mac or Windows computer with a projector into an electronic whiteboard. With the aid of a special marker, or LED keychain flashlight, the user controls the Mac/PC with the iPhone while standing in front of the projected desktop image. Using customized image processing technology, the app detects the LED light, and transmits the new location to the computer. The computer moves the mouse cursor accordingly.

The Skins Factory, and the code gurus at Hachisoft Corporation, have updated Viewer HD for the iPad to version 1.1.5.1. The $2.99 file viewer and management app lts you read documents, PDFs, eBooks, user manuals, comic books, listen to pre-recorded audio and music files, watch videos, and more. Zen Viewer HD enables a user to store, organize, rename, compress and password protect their files and folders all within its stylized and intuitive visual design.

Mother Tucker has introduced Speed Tracker 2.2, an update to their $0.99, realtime GPS sharing and monitoring app for iOS. It allows users to monitor the location, heading and speed of their device and other iOS devices on the Internet at the same time on a Google Map. Designed originally for Game Center, Speed Tracker can be used as a standalone speedometer, or view the player you’re connected to. Version 2.2 adds the GPS course and in-app friend requests.

Imesart has updated Audio Memos, a tool for creating audio memos on iOS devices to version 2.79. Voice activation with adjustable parameters helps users define when recording is taking place. Automatic sending by email, to Dropbox, iDisk or FTP servers offers a way to share recordings. The new “record on startup” feature makes it easier to create new recordings. Automatic alerts remind users to listen to a recording. Audio Memos 2.79 costs $0.99. Getting all the features requires an in-app purchase of $9.99; features are also available individually.

PhatWare has launched PhatPad 1.2, an update to their $7.99 note-taking and collaboration iPad app. It turns an iPad into an advanced brainstorming tool by enabling users to draw, write, and type on the iPad, then share ideas via email, WiFi sync, Dropbox, or with PhatPad’s built-in presentation mode. PhatPad’s new Document Manager helps iPad users find important information quicker by organizing documents in a folder hierarchy and more.

Fairlady Media says Bust A Marble 1.32, their recent iPad hit, is now available for iPhone and iPod touch. In this free puzzler, players string together groups of marbles to eliminate them from the board. Bust A Marble features 20 levels of play with an array of colored marbles.

Sprout! has updated Pixelate! for iOS devices to version 2.0. The app — available for $0.99 for a limited time — lets you visualize how a color would look on your wall without lifting a paint brush. It’s designed for anyone looking to pick the perfect color for their house or just to have fun with their pics on the iPhone. You can not only paint your walls, but also try out different colors on your clothes, furniture, car or anything else you would like to see in a different color.

Mikhail Eliseev has served up iPianoRoll 3.11 for the iPad. The $1.99 game was created to help users learn how to play their favorite music on the piano. Utilizing a full mini multi-touch piano keyboard and a “falling notes” structure, this musical app allows users to play, practice, and master their favorite songs on the piano.

Jonathan Tenkely has unleashed Pickin’ Stix 2.0, an update to his $0.99 game for the iPhone, iPod touch, and now the iPad. It’s a modern adaptation of the classic Pick-Up-Sticks game. Version 2.0 has been completely redesigned from scratch with all-new graphics and game play mechanics.

[MD1] MacHack: Mac to the Past, Nostalgic Theme Unveiled 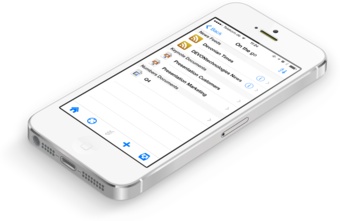