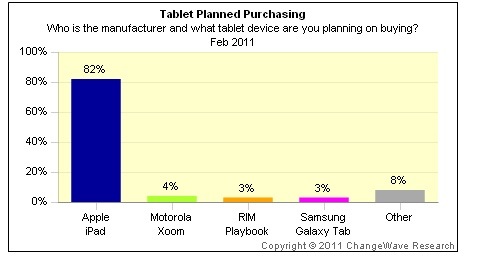 Since its initial release, the Apple iPad has been the de facto standard by which competing tablets are measured. But with the release of the iPad 2 just around the corner, can new tablets from Motorola, Research in Motion and a host of others successfully launch and compete?

During February, the ChangeWave (http://www.changewave.com)research group surveyed 3,091 consumers on tablet demand and future buying trends — including customer satisfaction, tablet cannibalization of other electronic devices, and consumer preference for wireless tablet services. The survey was completed just before Apple’s iPad 2 announcement.

Future tablet demand remains extraordinarily high among consumers – with better than one-in-four respondents (27%) saying they plan on buying a tablet device in the future. That’s two points higher than in a previous ChangeWave survey in November.

Neither the Motorola Xoom (4%) — which hadn’t been released yet at the time of the survey — nor the soon-to-be-released RIM/BlackBerry PlayBook (3%) have so far had a significant impact on iPad demand. Similarly, the Samsung Galaxy Tab (3%) has done little to date to slow the Apple tablet’s momentum.

It remains to be seen which of these tablet devices or other new entries in the market will be able to successfully compete, says ChangeWave. Each faces an uphill battle with the refreshed iPad 2 hitting the shelves March 11 (today).

Importantly, the iPad’s satisfaction in the ChangeWave survey rating remains outstanding among owners — with 70% saying they’re Very Satisfied and 25% Somewhat Satisfied with the Apple tablet device.

According to the ChangeWave survey findings, the two product lines most vulnerable to the tablet onslaught are eReaders and lLaptops. A total of 17% of tablet owners say they’ve put off buying an Amazon Kindle because they purchased a tablet. Another 9% have put off buying some other eReading device. The second most affected category is laptops (11%), followed by netbooks (10%).

Now that Verizon and AT&T are both offering wireless services for the iPad, where do future buyers plan to purchase the Apple tablet and which service will they be using? ChangeWave says 17% of planned buyers say they’ll purchase their iPad and get their wireless service directly from Verizon — that’s two points higher than in ChangeWave’s November survey.

The research group says that’s a significant achievement, considering Verizon has only been selling the iPad for four months. What’s more, beginning March 11 Verizon is offering the iPad 2 with a built-in 3G wireless chip, so new subscribers will no longer need to carry a MiFi mobile hotspot device. 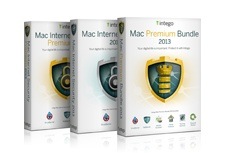