Steton Technology Group has announced Steton 360 mobileEl, a free app for iPads and iPhones that gives decision makers on-the-go access to customizable business intelligence dashboards and reports. Steton 360 mobileEl is an extension to Steton 360 Enterprise Edition, Steton’s Web-hosted business intelligence solution. It provides a way for managers to explore and analyze data in real-time. When used with Steton 360 Enterprise Edition, the application gives executives, managers and key workers information on how the organization is complying with quality, safety, regulatory and brand standards.

PollMate 1.0 for iOS is a new quantitative research tool. The free app allows anyone with a question to target people with answers. It uses Apple’s Push Notification Service to push polls to users, who can then donate points to charity partners RSPCA animal welfare or Starlight Children’s Foundation.

Power App has released Speech2Tweet 1.0 for iOS, a $1.99 app that allows users to create and send tweets by speaking into their iOS device. Following a brief period of calibration, during which it accounts for ambient noise levels, the app is ready to take dictation. A full-featured Twitter client, the app meets all the service’s latest security requirements. Also included are: switchable automatic geotagging of tweets and photos, URL shortening, TwitPic, retweet, reply, and Direct Messages.

“Simone and the Night’s Monsters” is a new, $4.99 iPad ebook based on wonderful illustrations by Italian illustrator Graziano Vitale. The story can be watched with colorful animations and sound, but with page-by-page turn. The character’s name can be changed as can the monsters’ names.

Tonchidot, a Tokyo-based mobile application company, has launched a free “domo” mobile app for the iPhone. It’s a “pre-social” application that “allows users to find people around them they do not yet know, who would be interesting to connect with.”

EmirBytes has debuted iQuikDoF 1.0 for iOS devices. Created specially for iPhoneographers, the free app can process selective focusing in any photos with the ability to produce a macro lense effects, Tiltshift effects, Miniature effects and Bokeh effects.

JBD Development has rolled out Family Quick Sit 1.0 for the iPhone, iPad and iPod touch. The $0.99 ap provides iOS users with instant strategic seating assignments right on the spot in just a few seconds based on both pre-configured and on-the-fly seating preferences. Attendees are selected along with options for grouping adults and children, with kids arranged by gender or age, parents sitting next to small children, couples sitting together or apart, and all the ladies seated together, etc.

Smappsoft has served up Look Again! 1.0, a “brain builder” for the iPhone and iPod touch platform. The $1.99 app challenges your brain to recognize patterns and shapes while playing a puzzle game.

Wallander Instruments has created WI Guitar, a music app for iOS devices. Based on patent-pending sample technology, it’s a $19.99 playable virtual acoustic guitar app. You can strum chords or pluck notes just as softly or as hardly as you like.

Easy Calendar 1.0 for iOS is a new week calendar that distinguishes between frequent and less frequent tasks. The $3.99 app integrates with the iPhone calendar and benefits from standard synchronization services.

SpartanApps has announced Ultimate Arm Wrestling 1.0.1 for iPhone, iPad, and iPod touch devices. The update of the $0.99 arcade style game challenges users’ speed, coordination and timing skills as they tap a quickly moving button as fast as possible to ensure their arm wrestling warrior wins their match.

SiVola has updated iSocialize for Facebook, Twitter and SMS for the iPhone, iPad, and iPod touch to version 4.2. This $0.99 “all-in-one” social networking and texting client consolidates users’ many avenues for digital interaction into one app.

Vito Technology has rolled out an update to GeoWalk — 3D World Factbook 2.0 for iOS devices. With the $0.99 app, you can “explore facts about the fascinating world around us.”

Real Inverse has updated Paper Ninja Shadow 1.5, a free edition of the game Paper Ninja for iPhone and iPod touch, to version 1.5. The Shadow version comprises the entire mission one and is presented in monochrome background to give a different feel to the original game. In order to master the game, players need to practice the skill of cutting the Paper Ninjas with a balance of speed and control to gain “Combo” and “Critical Hit.”

Independent iOS developer Raul Rea Menacho has launched Affix 1.5 for iOS devices. The $0.99 app lets you email yourself quickly with subject prefixes. You can create prefixes to fit your needs and configure your email to handle them with rules. Open Affix, tap a prefix from the list, type your reminder and hit Send.

Murtha Design has updated Unnecessary Censorship for iOS devices to version 1.3. The $0.99 app allows you to bleep, pixelate and censor video of your friends, family, pets, or anyone you wish to give the illusion that they swore or did something inappropriate. 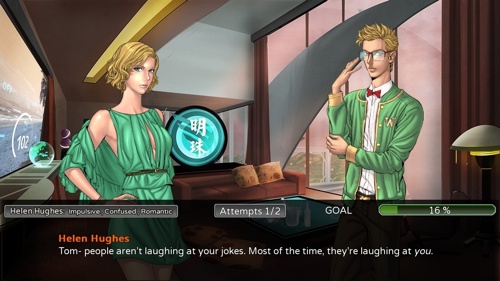