This software rips Blu-ray discs — but it costs time, money 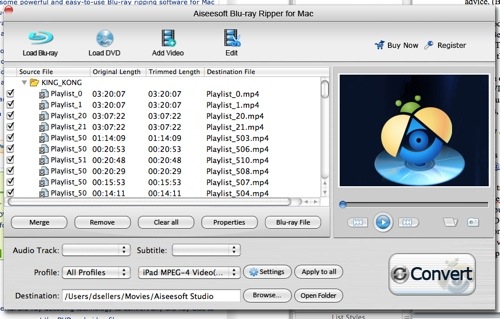 With Handbrake you can rip commercial DVDs to play on your Mac. But there’s been no way to do this with commercial Blu-ray discs until now. With Aiseesoft’s (http://www.aiseesoft.com/) US$39.95 Blu-ray Ripper for Mac ($39.95) , you can. However, be prepared to invest in time and money.

Blu-ray Ripper will rip any Blu-ray disc to other popular general video and HD video formats. It can also convert DVD and popular video files. Apart from the basic converting function, the app offers basic video editing functions, allowing you to trim the video segment, crop a video frame, merge video clips together, watermark video, and adjust video brightness, saturation and contrast. Plus, you can extract audio files from BD, DVD and video files.

I’m not going to get into the legalities here, but Aiseesoft Blu-ray Ripper for Mac enables you to remove copy protections, such as AACS, BD+, MKB V21, etc. This lets you convert your Blu-ray movie.

The software is pretty flexible. You can: merge several video clips together and output a single video file; split a video segment; trim the video segment by setting its start and end time; crop video playing area and adjust video aspect ratio; and adjust the output settings. You can output video for General Video (MPEG-4), HD Video (720p), iPad, iPod, iPhone, Apple TV (MPEG 4 up to 1280 x 720). The video quality is good, but, of course, not as good as the original Blu-ray disc itself.

This Blu-ray Ripper for Mac enables you to define output parameters, such as Video Encoder, Frame Rate, Video Bitrate, Audio Encoder, Sample Rate, Channel, and Audio Bitrate, Audio Track and Subtitle. You can choose your preferred Audio track and subtitle for the output video.

Though the software itself is inexpensive and easy to use, you’re going to need an external Blu-ray drive to use the software, such as the OWC Mercury Pro Blu-ray (http://www.macnews.com/2011/02/16/owc-mercury-pro-blu-ray-burn-baby-burn) — and that will set you back an additional $200 or so. Also, ripping a Blu-ray disc takes a looooong time. It took almost 10 minutes to rip five minutes of video from my “King Kong” Blu-ray disc.

With that in mind, the best choice for watching Blu-ray movies on your Mac is the Kanex HD and a Blu-ray player. See our review at http://www.macnews.com/2010/05/14/review-kanex-xd-must-have-imacblu-ray-fans .