Apple patent is for Mini DisplayPort 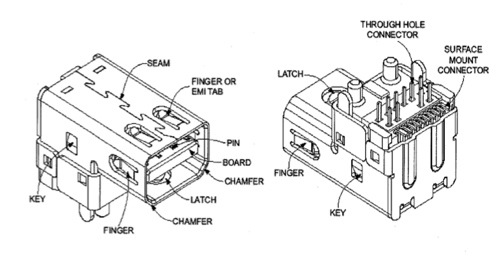 Apple seems to be planning a new version of the Mini DisplayPort, according to a new patent (number 20110039443) at the US Patent & Trademark Office.

The patent involves connectors having a smaller profile. These connectors are useful as a reduced form factor DisplayPort connector. Keys on a receptacle are used to indicate when an insert is fully engaged. Edges of the receptacle and insert are chamfered in such a way as to prevent the pins of the connector from being damaged when an improper insertion is attempted. User experience is also enhanced by the use of one or more latches.

As the connector is inserted, the latch provides resistance that builds until the connector is inserted a certain distance, after which the latch enters a cutout portion of the insert thus releasing the pressure and letting the user know the connection has been made. Fingers are employed to provide mechanical stability and electrical connection between receptacle and insert. The inventors are Stewart Shannon Fields, Matthew K. Herndon, Min Chul Kim, Ron Larson, Richard J. Middlehurst, Anilkumar R. Pannikkat, Glenn Wheelock and Colin Whitby-Strevens.

“Other connectors may be a hybrid of these, that is, the pin functions may be standardized, but the pin locations and connector form factor may be proprietary. Such a connector may be used on one end of a cable while a standard connector is used on the other. This arrangement has the advantage of allowing devices to use a proprietary connector to connect to a standardized device.

“In some applications it is desirable to reduce the size of these connectors. For example, a low height, or smaller z direction, allows a connector to be used on a thinner device. A narrower connector, a shorter x direction, allows more connectors to be included along an edge or side of a device.

“Thus, what is needed are connectors having a reduced size, a high level of signal integrity, and provide a tactile feedback to users such that they can determine whether a connection has been properly made.