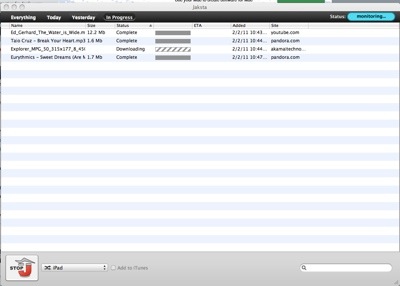 Applian Technologies and Jaksta showcased Jaksta for Mac OS X (10.5 and higher) at last week’s Macworld Expo in San Francisco. It lets you download and convert online streaming audio and video for personal use and is — as far as I can tell — the first program designed specifically for the Mac that can do this.

Jaksta supports just about all streaming formats and protocols (including FLV, HTTP, RTMP, IceCast, WMV, ASF, MP3, MP4, SWF, etc.), which means it can capture video from thousands of web sites including YouTube and Facebook. What’s more, because of Jaksta’s powerful audio-capturing capabilities, customers can download streaming audio from their favorite music and radio sites.

In addition to allowing Mac users to save their favorite videos, songs, and radio programs, Jaksta can automatically convert the downloaded files to a variety of devices. For example, you can save files as QuickTime for the iPod, iPhone, iPad, and Apple TV, as well as import ’em into iTunes. A drop-down menu lets you choose the conversion method you want.

Jaksta can automatically convert captured media files to other formats. The default setting is Default Conversion. This is best if you’d like everything that you download to be easily playable on your Mac. For example, it converts downloaded FLV’s to .mov files that play perfectly in QuickTime.

The Add to iTunes option becomes available if you’ve selected an iTunes compatible device format in the conversion drop-down. For example, if you’ve selected iPad and add to iTunes, captured files will be converted to the best format for your iPad, and sent directly to your iTunes library. Now just sync your iPad.

So how does it work? Jaksta locates the web address of the media file, reconnects to the host server, and makes an exact copy of the file on your Mac. It can make multiple simultaneous connections to further speed up the capture process. For example, you can download music from Pandora and videos from YouTube at the same time. Once the download process starts, you can close the video or audio player, and the file will continue to be captured.

Jaksta uses Growl — which lets Mac OS X applications unintrusively tell you when things happen — to discreetly show you when a stream has been detected and is downloading or completed. You can turn this on or off. You can also choose whether you want Jaksta to play a sound when a download finishes or it starts/stops monitoring.

Jaksta is a breeze to us. You just open it, and play the music and video you want to record. It makes exact copies of the original media and automatically converts recorded files. The folks at Applian say it records at up to 10x faster than the play speed as Jaksta grabs files directly from web sites where they’re hosted. I didn’t time it, but it is pretty darn quick.

I Jaksta’d a YouTube video of Ed Gerhard (an excellent musician/guitarist; check him out) playing “The Water is Wide” and assorted songs from Pandora Radio. Jaksta “grabbed them” and converted them to my preferences (formatted for the iPad and saved in iTunes) quickly and in the background while I did other work.

The only unusual thing I noticed about Jaksta is that the first time I opened it and tried to use it, the interface indicated it was working and monitoring a YouTube feed — but it never grabbed the file. Closing and re-opening it solved the problem.

Jaksta is available at http://www.jaksta.com/ for $49.95. A free trial mode that lets you download up to 50% of any on-demand audio or video clip and up to one minute of any live stream is available.