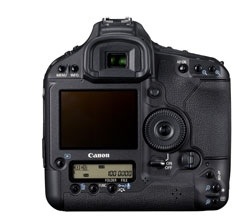 The ISO range of the sensor gets a major boost. The standard range is 100–12,800. The L setting remains at 50 while H1 moves to ISO 25,600, H2 is 51,200, and H3 has an amazing 102,400. That’s four stops higher than the Mark III. The dual DIGIC 4 Image Processors handle image quality at high speeds. I made several captures at the top of the standard range (12,800) and the results — especially when processed with the Camera Raw 6 Process Version 2010 (PV2010) using the Luminance Noise Reduction slider—provided truly wonderful results. At the risk of showing my age, photographs made at this ISO are much better than ISO 800 film I used to shoot.

Speaking of speed, the Mark IV shoots at a continuous 10 frames per second (fps) for 28 RAW files or 121 JPEGs using a high data rate UDMA CompactFlash memory card. The shutter is rated up to 300,000 exposures.

Autofocus in the Mark IV gets attention, too. Canon’s new AI Servo II AF 45-point system has the ability to manually select 39 cross-type points for fast, precise focusing. Custom functions allow the photographer to set a custom focus point that automatically switches when the camera is moved from horizontal to vertical positions. Adjacent sensors can be added to the primary when working with moving subjects.

One of my favorite features is the Mark IV’s 100% accuracy in the viewfinder. Another thing that’s easy to love is the ClearView II 3-inch LCD monitor that has a multicoated screen to reduce glare and a 160º angle of view, so photos can be easily seen by the photographer and onlookers.

The Mark IV’s sensor size is close to the aspect ratio in professional motion picture cameras shooting super 35mm movies. The APS-H sensor uses a shorter normal focal length lens, allowing increased depth-of-field especially with wide-angle lenses. Automatic Exposure (AE) control sets the meter to center-weighted average metering. Manual exposure is also available. The 1920×1080 HD video may be captured at 29.97, 25, or 23.976 fps — which are the rates for television and motion picture, respectively. It has 1280×720 HD or 640×480 SD (standard definition) at 59.94 fps. All video is recorded in the MOV format and will record a single clip up to 4GB (about 12 minutes in length), and the quality is good. The built-in microphone has mono recording and stereo sound is possible with an accessory microphone.

The Mark IV captures stills and video using CompactFlash or SD cards, or both, automatically switching from full to empty cards. The desired file’s size can be set for either card. Photographs may also be recorded to both cards at the same time to make a backup. Movies, however, can’t use this function.

Some photographers who are used to a lighter camera might have an initial adverse reaction to the Mark IV’s heft. I believe that after giving it a chance they’ll overcome size issues and fall in love with this machine. This is a professional’s small-format choice for extraordinary options in one digital camera body.