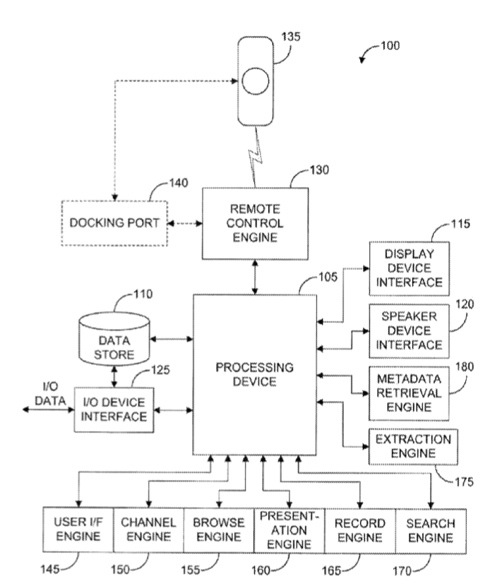 An Apple patent (number 7865927) at the US Patent & Trademark Office for enhancing media system metadata hints at what could be the future of the Apple TV — or perhaps an Apple TV successor — that involves implementing “cable/satellite box” features.

“In one aspect systems, methods, apparatuses, and computer program products are disclosed for media systems. Such systems can include a video input, a metadata input, a network interface and a search engine. The video input can be configured to receive video content, while the metadata input can be configured to receive metadata from a metadata provider, the metadata being associated with the video content.

“In one aspect, methods are disclosed which provide supplemental metadata, for example: receiving metadata associated with currently selected video content; extracting search parameters from the received metadata; and, searching a network for supplemental program data based upon the extracted search parameters.

“Media systems and methods described herein can provide supplemental information to content being presented either automatically or based upon user input, thereby allowing the user to locate information about the content that may be of interest. Media systems and methods can also provide entertainment to users in the form of, for example, commentaries, bonus footage, interactive trivia, pop-up trivia tidbits about content being presented to the user, and other data.”