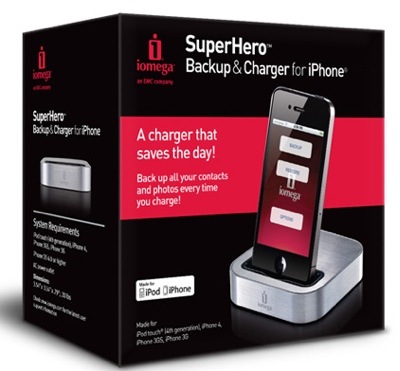 Iomega (http://www.iomega.com) is making several announcements at this week’s Consumer Electronics Show in Las Vegas, including a home media cloud edition, an iPhone backup and charger, (shown) and Iomega TV with Boxee.

Iomega has announced its Personal Cloud technology, which offers data protection and remote access solution for small businesses and consumers. It’s a web-based computing architecture that connects your Iomega network storage device to other individuals and/or devices via the Internet.

Iomega’s Personal Cloud technology is completely self-owned; the content and accessibility is always under your control. And there are no usage fees or subscription charges.

The Iomega Personal Cloud will be available worldwide beginning this month with the launch of the new single-drive Iomega Home Media Network Hard Drive Cloud Edition. It’s also a built-in feature in the new Iomega TV with Boxee, launching in February.

Users of Iomega’s new NAS devices can create their own Personal Cloud in just minutes, says Iomega President Jonathan Huberman. The onscreen Personal Cloud setup page asks you to name your Personal Cloud and then confirms creation of your Personal Cloud. You can invite up to 250 members (devices) into your Personal Cloud, giving your business contacts, co-workers or personal friends and family around the globe the ability — determined by you — to copy and share files directly between computers as though they were all together on a local network.

Users around the globe can sync files directly between computers as though they were on a local network. Many SMBs still keep key files on local hard drives. Business users can view and edit documents (such as spreadsheets, presentations and word processing documents), which helps geographically dispersed workers collaborate in real time.  Consumers can immediately share their family photos, videos and other digital files.
The new single-drive Home Media Network Hard Drive Cloud Edition is the latest generation of the original that lets home users and small businesses to share work files, photo slideshows, music libraries and other files with co-workers, friends and families anywhere in the world (with an Internet connection). It utilizes the EMC LifeLine software, a fully-developed Linux operating environment and suite of applications designed for cross-platform support with Mac, Windows and Linux computers. Among other features it sports a built-in iTunes server.

The new Iomega Home Media Network Hard Drive Cloud Edition will be available worldwide later this month in two capacities: a 1TB model for US$169.99, and a 2TB model for $229.99.

Iomega’s new SuperHero Backup and Charger for iPhone is a compact docking station device that sits on your counter, desktop or nightstand and plugs directly into a wall outlet. It comes complete with a 4GB SD card that provides the storage in the docking station for iPhone contacts and camera roll pictures. (The SD card is upgradeable if users need more capacity to back up one or more iPhones.)  Users download free of charge the SuperHero iPhone app from the Apple Store and their iPhone is ready for charging and backing up with the Super Hero Backup and Charger.

Finally, Iomega has announced the new Iomega TV with Boxee, a line of multimedia network devices utilizing Boxee’s software to bring the web to your TV. It’s also a network device that transforms your TV into a media center for all of the video, pictures and music stored anywhere on your home network.

Two versions of the new Iomega TV with Boxee will be available worldwide in February: one that includes 1TB or 2TB of onboard storage, and another model without an integrated hard drive.

Both models of Iomega TV with Boxee are compatible with DLNA devices on your home network, as well as Wi-Fi ready (802.11n) for flexibility in placing the unit next to your TV.  Both models feature two USB ports for additional storage. With full 1080p high definition playback, Iomega TV with Boxee supports virtually all of today’s popular CODECs and file types, including H.264, WMV, MKV, and plenty of others, says Huberman.