Apple’s online stores to get Ping-y? 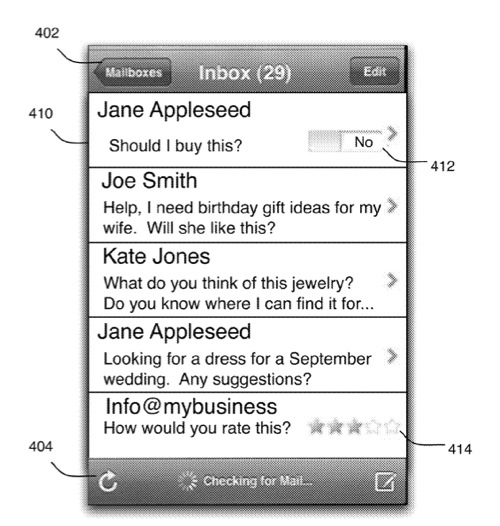 Ping on iTunes hasn’t exactly set the world ablaze, but Apple seems to be considering a similar feature for its online stores. An Apple patent (number 20100332283) for social networking in shopping environments has appeared at the US Patent & Trademark Office.

This is directed to a system and method for providing social networking services using a portable electronic device. In some embodiments, a user may identify one or more articles of interest and transmit identifying information for the articles to mobile or other devices of the user’s friends. The user’s friends can review the identified articles, and provide comments for the user.

For example, the user’s friends can give a thumbs up/down, a star rating, a comment (e.g., text, audio or video), or any other type of comment. In some embodiments, the user can request the assistance of a salesperson using the social networking application device, for example to request recommended articles based on a particular event or need. In some embodiments, the social networking application can provide information to or from a kiosk. The inventors are Stanley Ng, Christine Cho and Monica Tran.

“When shopping in brick and mortar stores, such as in a mall, some users like having friends with them to look at items to purchase (e.g., clothing), and to get their friends’ recommendations and comments on proposed purchases. Similarly, some users rely on salespeople recommendations to select which items to purchase, or which items to try (e.g., which clothing or outfits to try on). These approaches, however, require the user to have their friends with them during the shopping trip, or require the users to catch the attention of a salesperson and ensure that the salesperson remains available during the shopping trip.

“In a shopping environment, a user may identify one or more articles of interest. Before purchasing the articles, the user may wish to consult with friends or other people. To do so, the user can use a mobile device to transmit identifying information for the articles to mobile or other devices of the user’s friends (e.g., some or all friends in an address book, or just friends located within a maximum distance of the user, for example in the same mall). The identifying information can include links to databases of the articles, images or photographs of the articles, location information for the friends to see the articles (e.g., identify a rack in a store where an article of clothing was found) or any other suitable information. The user’s friends can review the identified articles, and provide comments for the user. For example, the user’s friends can give a thumbs up/down, a star rating, a comment (e.g., text, audio or video), or any other type of comment.

“In addition to sending and receiving communications directly with friends or salespersons, the social networking application can provide information to or from a kiosk. The kiosk can include communications circuitry for receiving information from individual users’ electronic devices, and storage for storing received information. Using an electronic device, a user can provide information identifying articles of interest to the kiosk. Other users can then retrieve the information from the kiosk, and provide comments or other recommendations directly to the user or to the kiosk. The user can then retrieve the recommendations from the kiosk at a later time.

“In some embodiments, the kiosk can include a display and input interface by which users can interact with the kiosk. For example, users can direct the kiosk to display information for review. Using the input interface, users can provide recommendations, or identify other articles available for purchase by the user (e.g., surf the Internet using the kiosk, or navigate through catalogs of articles offered for sale by stores in the vicinity of the kiosk).

Also, another Apple patent (number 20100332296) has appeared that related to Apple’s online stores. It involves systems, methods and computer-readable media for community review of items in an electronic store.

Rankings can be directed to different subdomains in the electronic or online store. Individuals having favorable successful prediction ratios can receive incentives. Sam Gharabally is the inventor.