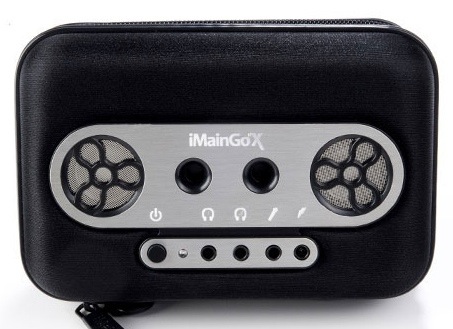 Portable Sound Laboratories (http://www.imaingo.com)’s US$69.99 iMainGo X. is designed to offer “high-end sound quality and amazing light weight portability to customers who use the iPhone, any Apple iPod, the Microsoft Zune, and most other MP3 players.” It does offer better-than-I-would-have-expected sound, though that comes with some added heft to any device you use it with.

The iMainGo X custom fits and protects all iPods (except the shuffle), the iPhone and iPod touch. It can also used as an external speaker system for any device with a 3.5 mm connection, such as the iPad, Kindle, laptop computers, electric guitar, etc.

The iMainGo X weighs nine ounces and measures 5.7 x 3.8 x 2.4 inches. It comes with the speaker/case itself, an AC power supply, carrying bag, wrist strap, lanyard and memory foam insert, so you get quite a bit of bang for your buck.

The iMainGo X case feels pretty tough. It’s made of a hard plastic covered with water-resistant neoprene. There’s a zipper closure around three sides; you unzip the iMainGo X to place your iOS device (or other gadget) inside. A foam lining is inserted behind your device to keep in snugly in place and make sure it presses against the clear cover. But more on that clear cover in a moment.

One side of the case holds the speakers. Each are less than an inch in diameter and covered with a metal grill. The iMainGo X also has two open bass ports, each about a half-inch in diameter.

The power switch and connector ports are located under the speakers. The power button sinks in so you won’t accidentally turn the iMainGo X on; I found the sunken button to be a bit inconvenient, but I understand the reasoning behind it.

I’m not sure why you would want to do this, but you can chain multiple iMainGo X devices together for even more volume. You connect the 3.5mm plug of the second device to the second headphone jack on the first iMainGo X. Connect the first iMainGo X to your iOS or other device. However, if you’re going to all this trouble, why not just get a dedicated speaker system?

The iMainGo boasts an internal rechargeable battery that can run for almost 12 hours. The battery is user user replaceable, which is nice. On the downside, there’s no way of keeping your device charged up while it’s inside the case/speaker combo.

So how does the iMainGo X sound? Pretty sweet. Thanks to its digital amplifier, it can pump up the volume with no distortion unless you crank it up to 11. The bass is also deeper than with most devices of this size. Of course, there’s no stereo separation on a gadget this small.

If you’re using an iPhone with the iMainGo X, you’ll have to take it out of the case to make a call, which is a bit of a hassle. An unavoidable one, but still, a hassle.

I also wish the iMainGo X had its own volume control. Volume is controlled by the enclosed/attached device. You can use the controls of said device by accessing them through the clear back window of the iMainGo X. This works, but using the Multi-Touch controls through the window isn’t as precise and efficient as touching them directly on the iOS device itself.

The iMainGo X does its job of protecting your iOS device while serving as a compact-but-powerful speaker case. If you can overlook its quirks — and if you don’t need a case that you can stash in your pocket — it’s worth a look-see. 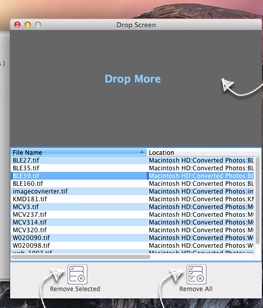