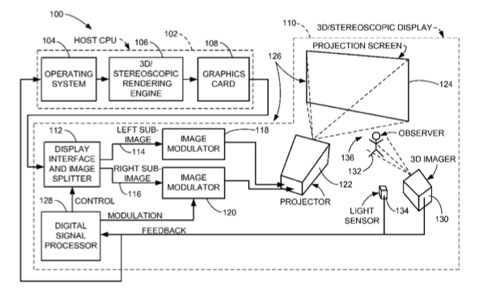 Apple has been granted a patent (number 7843449) for a three-dimensional display system. Don’t expect Macs with 3D displays anytime soon, but they may be coming — and without the need for special glasses, if Apple has its way. After all, Intel’s Sandy Bridge processor will debut in January and will certainly arrive in Macs next year. And the processor offers native support for 3D stereoscopic video playback (as well as Blu-ray and USB 3.0).

“The increasing interest and popularity are due to many factors. In our daily lives, we are surrounded by synthetic computer graphic images both in print and on television. People can nowadays even generate similar images on personal computers at home. We also regularly see holograms on credit cards and lenticular displays on cereal boxes.

“The interest in 3D viewing is not new, of course. The public has embraced this experience since at least the days of stereoscopes, at the turn of the last century. New excitement, interest, and enthusiasm then came with the 3D movie craze in the middle of the last century, followed by the fascinations of holography, and most recently the advent of virtual reality.

“Recent developments in computers and computer graphics have made spatial 3D images more practical and accessible. The computational power now exists, for example, for desktop workstations to generate stereoscopic image pairs quickly enough for interactive display. At the high end of the computational power spectrum, the same technological advances that permit intricate object databases to be interactively manipulated and animated now permit large amounts of image data to be rendered for high quality 3D displays.

“There is also a growing appreciation that two-dimensional projections of 3D scenes, traditionally referred to as ‘3D computer graphics,’ can be insufficient for inspection, navigation, and comprehension of some types of multivariate data. Without the benefit of 3D rendering, even high quality images that have excellent perspective depictions still appear unrealistic and flat. For such application environments, the human depth cues of stereopsis, motion parallax, and (perhaps to a lesser extent) ocular accommodation are increasingly recognized as significant and important for facilitating image understanding and realism.

“In other aspects of 3D display technologies, such as the hardware needed for viewing, the broad field of virtual reality has driven the computer and optics industries to produce better stereoscopic helmet-mounted and boom-mounted displays, as well as the associated hardware and software to render scenes at rates and qualities needed to produce the illusion of reality.

“However, most voyages into virtual reality are currently solitary and encumbered ones: users often wear helmets, special glasses, or other devices that present the 3D world only to each of them individually.

“While these approaches have been generally successful, they have not met with widespread acceptance because observers generally do not like to wear equipment over their eyes. In addition, such approaches are impractical, and essentially unworkable, for projecting a 3D image to one or more casual passersby, to a group of collaborators, or to an entire audience such as when individuated projections are desired. Even when identical projections are presented, such situations have required different and relatively underdeveloped technologies, such as conventional autostereoscopic displays.

“The consideration of freedom from headgear has thus motivated developments in autostereoscopic displays that automatically render a stereoscopic viewing experience for the observer without requiring the observer to use or wear special accommodations or devices.

“Re-imaging displays typically capture and re-radiate the light from a three-dimensional object to a new location in space. Volumetric displays span a volume of space and illuminate individual parts of that space. Parallax displays are surfaces that radiate light of directionally varying intensity. Displays of each type have been used in commercial display systems, and each has inherent strengths and weaknesses. The more common display approaches tend to fall into the two main categories of volumetric and parallax.

“Autostereoscopic displays of the volumetric type produce 3D imagery by generating a collection of points within a volume that operate as light sources that emit, or appear to emit, light. If these points emit light isotropically, which is often the case, the resulting images appear ghosted or transparent. As a result, a typical volumetric display does not create a true 3D light field because the volume elements that are aligned depth-wise are not perceived to block one another. That is, the images do not display occlusion.

“Autostereoscopic displays of the parallax type perform stereo separation of images internally, so that an observer is not required to use additional eyewear. A number of display systems of this type have been developed that present a different image to each eye as long as the observer remains in a fixed position in space. Most of these are variations on the parallax barrier method, in which a fine vertical grating or lenticular lens array is placed in front of a display screen.

“When the observer’s eyes remain fixed at a certain location in space, each eye can only view one set of display pixels (even or odd) through the grating or lens array, and not the other set. This geometry can then ensure that each eye sees only its own respective image, corresponding to the set of pixels that display that distinct view of the image. The two image views, seen individually by the respective right and left eyes of the viewer, are configured so that the human visual system interprets the separately viewed images concurrently as a single 3D image.

“This occurs without the observer having to wear or use any personal assistive devices. However, the parallax barrier method typically requires the observer to remain stationary in one location. Further, in many cases, such displays generate a two-dimensional light field that provides horizontal but not vertical parallax.

“A more recent and potentially much more realistic form of autostereoscopic display is the hologram. Holographic and pseudo-holographic displays output a partial light field that presents many different views simultaneously by effectively re-creating or simulating for the viewer the original light wavefront. The resulting imagery can be quite photorealistic, exhibiting occlusion and other viewpoint-dependent effects (e.g., reflection), as well as being independent of the viewer’s physical position. In fact, the viewer can move around to observe different aspects of the image. The holographic image also has the potential to allow many observers to see the same image simultaneously.

“Although much more realistic, a dynamically presented holographic image also requires far greater computational ability and bandwidth than is generally required for a two-view stereo display. Effective means are also noticeably wanting for dynamically recreating the original wavefront, or an acceptable facsimile thereof, in real time and at commercially acceptable costs.

“Thus, a need still remains for highly effective, practical, efficient, uncomplicated, and inexpensive autostereoscopic 3D displays that allow the observer complete and unencumbered freedom of movement. Additionally, a need continues to exist for practical autostereoscopic 3D displays that provide a true parallax experience in both the vertical as well as the horizontal movement directions.

“A concurrent continuing need is for such practical autostereoscopic 3D displays that can also accommodate multiple viewers independently and simultaneously. A particular advantage would be afforded if the need could be fulfilled to provide such simultaneous viewing in which each viewer could be presented with a uniquely customized autostereoscopic 3D image that could be entirely different from that being viewed simultaneously by any of the other viewers present, all within the same viewing environment, and all with complete freedom of movement therein.

“Still further, due to the special user appeal but the daunting unsolved technical challenges, a distinctive need particularly continues for practical autostereoscopic 3D displays that provide a realistic holographic experience. Even more extraordinary would be a solution to the need for a holographic or pseudo-holographic viewing system that enables multiple simultaneous and individuated viewing as described above.

“Yet another urgent need is for an unobtrusive 3D viewing device that combines feedback for optimizing the viewing experience in combination with provisions for 3D user input, thus enabling viewing and manipulation of virtual 3D objects in 3D space without the need for special viewing goggles or headgear. 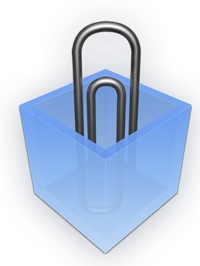