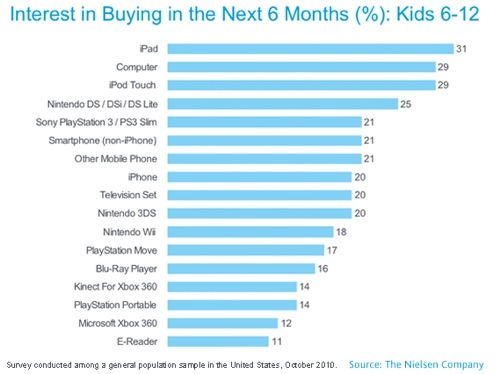 With Black Friday rapidly approaching, parents may want to get up early Friday morning to find deals, as a recent survey shows their kids are eyeing some wallet-stretching electronics this holiday season.

Across a multitude of electronic offerings, the Apple iPad leads all devices (31% interest in future purchase) among American kids ages 6-12, according to a new survey from the Nielsen research group (http://en-us.nielsen.com/content/nielsen/en_us/expertise.html). Apple’s iPod touch is also popular choice among kids, generating similar levels of interest as computers.

In fact, the iPod Touch outpaces the perennial handheld gaming favorites Nintendo DS and Sony PlayStation Portable. Among gaming consoles, kids indicate they will be requesting the Sony PlayStation 3 the most this year; however, the platform will be competing with a variety of equally-popular mobile devices, notes Nielsen.

For the rest of U.S. consumers, electronic upgrades look to be a popular trend this year, with future interest in commonly owned devices such as computers, televisions, and smartphones outpacing other electronic offerings among consumers ages 13+. Kids aren’t the only ones interested in the iPad: fully 18% of the 13+ population is also eyeing this hot new offering. The emerging technologies offered by Blu-Ray players and eReaders also have good traction with teens and adults, notes Nielsen.

PowerSchool SIS to be demoed at WWDC 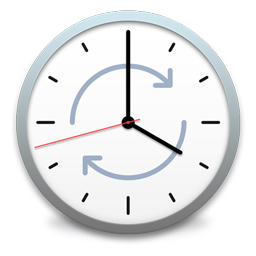