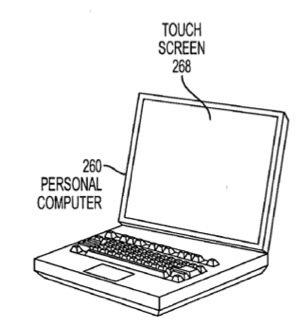 An Apple patent (number 20100253638) — which first appeared in 2009 — underscores the fact that the company is working on touchscreen Macs. The patent, “Integrated Touch Sensitive Display Gate Driver,” describes a circuit that would switch between display and touch modes, enabling and disabling an integrated touch sensitive display when necessary.

Here’s Apple’s background and summary of the invention: “Many types of input devices are available for performing operations in a computing system, such as buttons or keys, mice, trackballs, touch sensor panels, joysticks, touch pads, touch screens, and the like. Touch screens, in particular, are becoming increasingly popular because of their ease and versatility of operation as well as their declining price. Touch screens can include a touch sensor panel, which can be a clear panel with a touch sensitive surface, and a display device such as a liquid crystal display (LCD) that can be positioned behind the panel so that the touch sensitive surface can substantially cover the viewable area of the display device.