The Mac, not the iPad, is the ‘Mac for the masses’

I always like hearing Piper Jaffray analyst Gene Munster’s take on Apple’s outlook. I think he’s usually on target (though I think he’s off base in predicting that Apple will introduce its own line of HDTVs within two years), but I think he’s a bit off base when he calls the iPad the “Mac for the masses.”

In a note to clients Thursday, Munster predicts that Apple will sell 21 million iPads in 2011. That’s more than he had previously predicted due, he says, to t broader distribution, an international rollout and enterprise demand. For those reasons he dubs the iPad the “Mac for the masses.”

However, I’ll continue to maintain that the Mac is the “Mac for the masses.” After all, its market share is, by some reports, nearing 10% in the US. I think it will reach that goal as the iPad, iPod and iPhone lines have a “halo effect” of luring more people to the Mac. Plus, despite the miserable economy, for the fiscal 2010 third quarter that ended June 26, Apple shipped 34.7 million Macs, beating their previous-best ever quarter by over 100,000.

Actually, I think Munster was merely coining a clever phrase when he said the iPad was the “Mac for the masses.” He pretty much agrees with what I’ve said before in that the Apple tablet will complement the Mac, not displace it. Among other things, he says “iPad represents a meaningful product category for Apple as a secondary computing device for those who already have a primary computer.” 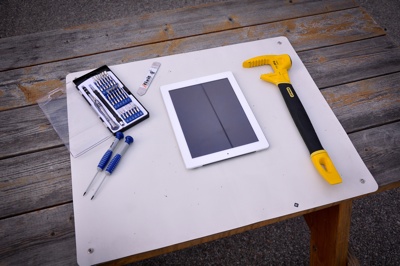 ‘iFixIt’ introduces iPad Fubar, for getting inside the tablet