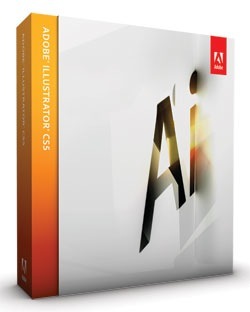 As the Creative Suite versions of the Adobe (http://www.adobe.com) software mature, the list of new features for each program grows smaller, but the new features seem to be getting better. This release has some nice features, making this an important upgrade for those using Illustrator for more artistic purposes — of course, many of those features are useful for graphic designers, too. Here are the top new features for Illustrator CS5 (a.k.a. version 15).

The Perspective tools are a welcome, if not overdue, addition to the Adobe Illustrator (AI) feature set — one wonders if this feature was on the drawing board for some time or was the technology a pick-up from Adobe FreeHand MX.

Think of the new Shape Builder tool (Shift-M) as “Live Paint meets Pathfinder.” You can work with selected shapes (much like Live Paint) to merge and subtract the overlapping areas (like the Unite and Minus Front options in Pathfinder). At first I thought this was a tool for those who didn’t like the Pathfinder panel, but the more I work with it, the more I like it. I wouldn’t necessarily upgrade just for it, but it certainly adds to the overall package.

Variable-width stokes is one of the best improvements to happen to strokes in a long time. The Width tool (Shift-W) allows you to take a standard stoke and change the width dynamically by clicking on a stroke and dragging away from the center of the path. Stokes can be adjusted on one side of the path by holding-down the Option (PC: Alt) key and dragging. The settings can even be saved as a stoke profile for future use. Compared to the old process of outlining a stroke, adding points, and then editing them with the Direct Selection tool (A), this tool is a big time saver.

Arrowheads have been added to the bottom of the Stroke panel and are much easier to implement now. A nice new feature is to have the arrowhead end at the path anchor point, rather than sticking beyond it.

The oft-forgotten Brush panel gets a fun, new type of brush: the Bristle Brush. This allows Photoshop-like brushes to be created and used with the Paintbrush tool (B) in Illustrator. Of course, just like previous brushes, they can be applied to existing paths and shapes. This tool really requires a tablet for proper freehand use—with a tablet you can see the brush shape and angle.

The multiple artboard features get some needed improvement by way of the new Artboards panel. Artboards can be named, reordered, added, duped, deleted, and rearranged with the new panel. In addition, the panel can be used to jump from artboard to artboard.

There’s now a Paste on All Artboards command (under the Edit menu) — handy when working with repeating elements such as symbols. Artboard rulers got a needed makeover, too. Instead of separate rulers that didn’t do much (as in CS4), the traditional ruler changes for each artboard. Each artboard can have a custom zero-point, too. Another big change with rulers is that they’re now oriented in the upper-left corner like InDesign, not in the bottom-left corner like the previous version.

In previous versions, raster-based effects — such as drop shadows, glows, and Photoshop effects — in a print-based document could really bog down your computer. One trick was to work with a lower effect resolution and increase it later during final output. Unfortunately, some effects were measured by pixels; so changing from 72 ppi to 300 ppi could dramatically alter the look of the effect. Now, the settings are recalculated to look similar; however, because they’re being recalculated, the appearance might change slightly.

This feature is important since Illustrator CS5 isn’t 64-bit, but still 32-bit, so it can’t access more than 3–4 GB of RAM. Granted, most users would never need the 64-bit option, but I’ve seen Illustrator slow down due to high-res effects.

There are three drawing modes now: Draw Normal, Draw Behind, and Draw Inside (you can find these options near the bottom of the Toolbox). Draw Normal is what you’ve normally used in AI in the past. Draw Behind does just that: Draw behind the selected object(s). If nothing is selected, it draws beneath all objects on a layer. Draw Inside draws inside the selected object; basically, it creates a clipping path automatically, but it’s much easier than previous methods.

Symbols have had a number of improvements, but the most dramatic is the support of 9-slice scaling. While it was available in the last few versions of Illustrator, it was only for symbols being exported to Flash. The feature was meaningless in Illustrator. Not any more—now it works in AI, too!

When creating graphics for the Web, the Transform panel has a couple of new options: Align to Pixel Grid for existing objects and Align New Objects to Pixel Grid. This prevents any “fuzzy” graphics when exported for the Web. Another feature is similar to the pixel grid feature in Photoshop: When View>Pixel Preview is on and the zoom level is greater than 600%, a pixel grid is visible for precise alignment of objects.

Some of the new features are just improvements of existing features; in other words, they’re not earth-shattering. Overall, this is a nice upgrade — either by itself (does anyone buy separate packages anymore?) or combined in an Adobe Creative Suite.

Illustrator CS5 costs US$599 for new users. Upgrades from previous versions at $199

Could an ‘iHome’ be closer when Lion prowls?