The agenda has been set for the Third Annual FCPUG Amsterdam SuperMeet (http://www.supermeet.com) be held Sunday, Sept.12, at the Hotel Krasnapolsky in the heart of Amsterdam during IBC week.

Tickets are on sale now and can be purchased at the SuperMeet web site. Doors open at 16:30. As part of the Digital Showcase, there will be the inaugural “Open Screen Theater.” Filmmakers and digital content creators wanting to “Get Seen” will have a 10 minute chance to do so in an informal, collaborative setting.

Scheduled to appear will be Joran Maaswinkel, senior editor of Bake Post, who will join Autodesk’s Grant Kay to help demystify Smoke for Mac OS X. Warren Eagles, a color artist for more than 20 years on movies such as “The Great Raid” and “Lock, Stock and Two Smoking Barrels,” as well as TV series such as “Rush,” will give an in-depth look and demo at the new DaVinci Resolve for Mac, including workflow demos within Final Cut Pro.”

Max Burgess, offline/online editor at SpliceTV will showcase some work edited on Avid Media Composer and shot with the RED Digital Cinema camera. The entire second half of the show will be devoted to Final Cut Studio Tips & Tricks. Apple Master Trainer Abba Shapiro will host and will share numerous FCP tips and tricks. He will be joined on stage by the UK’s Simon Walker, Russia’s Andrei Nazarov and Germany’s Andrea Rud.

Simon Walker will show how to animate text in Motion and FCP in just 10 minutes. Editor Andrei Nazarov who will also show off more FCS solutions. Andrea Rud, a Final Cut Pro Trainer, with more than 22 years of editing experience, will show time-saving techniques for editors to sync cameras and audio files in Final Cut Pro. She will demonstrate two workflows, with SD and Red cam material. 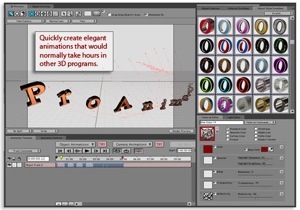