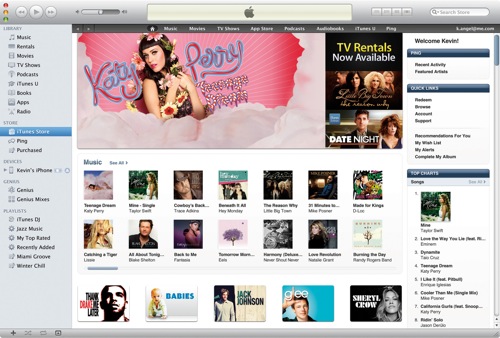 Apple has introduced iTunes 10 with Ping, a new music-oriented social network for following your favorite artists and friends to discover what music they’re talking about, listening to and downloading.

iTunes Ping lets you post your thoughts and opinions, your favorite albums and songs, the music you’ve downloaded from iTunes, plus view concert listings and tell your friends which concerts you plan to attend. iTunes 10 also features HD TV show rentals for 99 cents an episode and AirPlay wireless music playback.

Ping lets you follow your favorite artists to see what they’re up to, check out photos and videos they’ve posted, see their tour dates and read comments about other artists and albums they’re listening to. You can also create a profile on iTunes to let your friends know who you’re following, what you’re listening to and which concerts you’re going to.

Ping’s Recent Activity feed shows you their posts about artists, albums, songs and concerts, plus a consolidated Top 10 list of the songs and albums your friends and the artists you follow are downloading from iTunes. In addition to using Ping on your desktop computer, you can take it with you on your iPhone or iPod touch.

With iTunes 10, you can rent your favorite HD TV shows commercial free from ABC, ABC Family, Fox, Disney Channel and BBC America and watch them at home or on the go. Thousands of episodes are available, many the day after broadcast, to watch on your Mac or PC, iPhone, iPod touch and the all-new Apple TV (see separate article), and you have 30 days from the moment you rent an episode to start watching it, and 48 hours after that to finish it.

iTunes 10 also features AirPlay wireless music playback to listen to your music on remote speakers using Apple’s AirPort Express base station. In addition, AirPlay now works without AirPort Express, using speakers, receivers and stereo systems from companies including Bowers & Wilkins, JBL, Denon and iHome, so you can enjoy your entire iTunes music library wirelessly from any room in the house with no extra gear required.

iTunes 10 is available immediately as a free download at http://www.itunes.com . HD TV show rentals require iOS 4.1, which is a free software update available via iTunes 10 or later for iPhone and iPod touch users. iOS 4.1 works with iPhone 3G, iPhone 3GS, iPhone 4, and second, third and fourth generation iPod touch. The 99 cent HD TV rentals only available in the US.

iTunes has also gotten a new icon. Apple CEO Steve Jobs said that it was projected that iTune music sales would surpass CD sales next year, so it was time to drop the old icon, which had the image of a CD in it.