In my home office, I have a 32-inch Vizio display attached to my iMac. I can use it as a secondary monitor and/or watch Blu-ray movies (since I can’t do that natively on my Mac — thanks, Apple) due to the Kanex iAdapt HDMI V2 (http://kanexlive.com/products/iAdaptV2.html).

It’s an US$29.95 Mini DisplayPort to HDMI adapter that supports audio for the newer Macs. It supports full 1080p HD video output and audio to a single HDMI cable. In addition to an HDTV, you can also attach items such as an HD projector or monitor. The iAdapt HMDI V2 supports audio and video passthrough for April 2010 MacBooks and MacBook Pros and all 21.5-inch and 27-inch iMac desktop computers.

Said systems are now equipped with a new and improved Mini DisplayPort that can support both audio and video output. Might as well take advantage of this feature.

Set-up couldn’t be easier. You plug it into your Mac’s Mini DisplayPort, then attach your HDMI device. That’s it. And the Kanex device is streamlined, so its design allows for a single cable solution for HDMI connectivity. At 30 bucks, it’s certainly worth the money.

On the other hand, if you want to watch full screen HD playback of Blu-ray discs or connect an Xbox 360 or PlayStation 3 directly to your Mac and not bother with an external display, the Kanex XD is an excellent (though pricier at $149.95) solution. 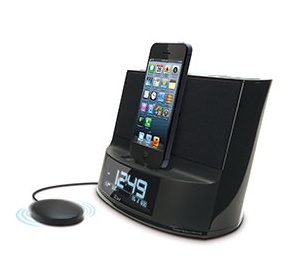 Macs with double-high resolution displays may be coming