Apple has won several patents from the US Patent & Trademark Office, including design patents for the iMac and Apple TV.

Patent number 7,770,117 involves morphing between views of data in iMvoie. A method, apparatus, system, and signal-bearing medium are provided that in an embodiment morph between two graphical views of related content that share a common frame of reference. In an embodiment, the two views depict the same data at different resolutions. The morphing permits the viewer to visualize the relationship between the two views along a common axis or within a common frame of reference. In another embodiment, the two views may be a clip view and a timeline view. In the clip view, icons representing clips are the same size. In the timeline view, icons representing clips have a size proportional to the time of the clip when played. A virtual playhead icon is maintained in the same relative position in both views, so that a user’s focus is maintained. The inventors are Michael Uy and Timothy E. Wasko.

Patent number 7,768,462 is for a method and system for fast 90 degree rotation of arrays. A method and system to rotate a 2.sup.N by 2.sup.N array are described. Consistent with one embodiment of the present invention, the 2.sup.N elements of the 2.sup.N rows of a 2.sup.N by 2.sup.N array are loaded from memory into the vector registers of a processor’s single instruction multiple data (SIMD) unit. Next, the elements of the rows in the top half of the array are interleaved with corresponding elements from a corresponding row in the bottom half of the array. The loading and interleaving operations are repeated N times before the results, stored in the vector registers, are written back to memory. The inventor is Ian R. Ollman.

Patent number 7,768,535 involves image publication in iPhoto. To better realize the great potential of amateur digital photography, the present invention introduces an integrated system for the acquisition, organization, manipulation, and publication of digital images by amateur digital photography enthusiasts. The system of the present invention first acquires images from a number of different image sources. Images acquired in the same image importing session are marked as coming from the same conceptual film roll. Next, a user is empowered to organize and manipulate the acquired images. The images may be organized by tagging the images with informative keywords and grouping images together into conceptual photo albums. Furthermore, the images may be manipulated by rotating, cropping, and removing red-eye. Finally, the system of the present invention provides simple intuitive image publish systems. A selected group of images may be published in a photobook, published onto the World Wide Web, or published as individual image prints with minimal computer knowledge on the part of the user. The inventors are Glenn Reid, Tim Wasko and Daniel B. Waylonis. 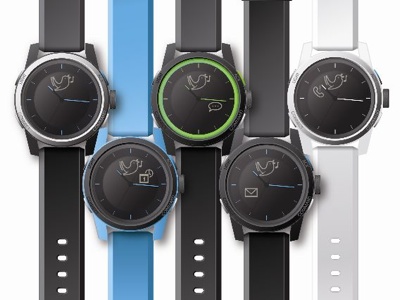 Cookoo is ‘connected’ watch designed to work with your iPhone