Smith Micro Software has released SendStuffNow for Apple’s iPhone and iPad. The free app enables iPhone and iPad users to send large files, track the status of pending file deliveries and create new invitations to allow additional users to access files that have already been uploaded. Now, regardless of location, consumers and professionals can create, access and manage shared file links with the tap of a screen. SendStuffNow for the iPhone and iPad also makes it possible to upload and share photos and videos captured on these devices.

Redbits has unveiled Group Email! 1.0 for iOS devices. With the $2.99 app you can send email to groups, to handpicked set of contacts or to custom distribution lists. You can optionally attach photos, videos, documents, your current location information with map and address, audio clips, pasteboard content and contacts information. And if you send the same email text frequently, you can create a template and use it for save typing.

Zentertain has rolled out Tapic 1.0 for iPhone and iPod touch devices. It’s a $0.99 rhythm game that lets you play with all your own iPod music. The gameplay is similar to Tap Tap Revenge but the huge difference is you can play with whatever music you want and you don’t have to buy any music packs.

eWEEK Europe UK, an online publication designed for the new era of IT, has published a new, free app that will allow users to access and interact with its news content across all Apple devices including the iPhone, iPod Touch and iPad.

Nate Heagy has launched Word Descrambler 1.0.1, a retro-styled app for iPhone, iPad, and iPod touch devices. The $0.99 app will find every possible word in a given Scrabble or Words with Friends tile rack.

AlwaysOnPC has rolled out AlwaysOnPC 1.0 for the iPad. The $9.99 app liberates mobile users to browse any web site on FireFox, and empowers them with over 40 programs including a PC-caliber mobile Office suite. The OpenOffice suite lets users edit office documents and is fully open and save compatible with most common file types.

Yianni-software has introduced Laddersnake 1.0, a $0.99 board game for the iPad device. The original premise of snakes and ladders is at the heart of the game. Up to four Players can play, and each get four bonuses at their disposal to unleash attacks onto their opponents.

Dot Next has announced OctoPaul 1.0, a free iPhone/iPod touch app for consulting the oracle octopus. It offers a way to choose between two choices when you can’t do it yourself.

Locus Innovations has released Fantasy Trader 1.0, a $0.99 app that will -inchlet users to immerse themselves into the world of sports and feel the frenzy of the fast paced world of big money.-inch Driven by supply and demand just as in real life, Fantasy Trader represents a virtual sports trading platform that enables sports enthusiasts to purchase and sell virtual sports shares with virtual money in a free market system.

Atomic Software has introduced Bike Repair 1.0, a $1.99 iPhone/iPod touch app that offers a step-by-step reference guide to dozens of common bike repair issues. It offers detailed instruction on over two dozen common repairs that work for every major brand of bicycle.

Ian Miller has unveiled Salesdiver 1.0 for iPad devices. The $9.99 app serves to help sales people -inchclose more business by gaining a broader understanding of their sales opportunities.-inch It purportedly does this by prompting them during their sales calls to ask the right questions to qualify their opportunities thoroughly.

Drew Crawford has produced Timely Lite 1.0, a free version from the successful Timely app family for the iPhone and iPod touch. It lets hourly employees track time and wages, fill out timecards, and keep a detailed work history. Timely Lite also lets users see their earnings for the day or week with a live-updating display.

Moving Tales has announced The Pedlar Lady of Gushing Cross, $4.99 iPad app. It lets adults share stories. Inspired by the age-old tale of a man who becomes rich through a dream, it describes the journey of a poor pedlar woman who, guided by the shifting line between the real and the unreal, discovers a surprising treasure.

Catamount Software has released Today! 1.0, an app that supplements Calendar to add missing features sought out by busy professionals and others who need more ease, efficiency, and power than Apple’s Calendar supplies. It shows info about appointment time, location, and notes for the appointment and integrates with Maps so you can tap on location to open the route to your next appointment. Today! is available in a US$2.99 and free, ad-supported versions.

Happy Blue Fish Studio has released Okinawa Game: Keep Your Vitality 1.0.1 for the iPhone and iPod touch. The $2.99 app is comprised of four mini-games, as well as an information section.

Iambic has announced an update to the $7.99 iPhone version of its Agendus personal information manager app. The new version includes key fixes and enhancements for iOS 4 and builds on the version released last month, which brought significant updates to the interface aimed at helping users better manage their time and to-do list.
iHomeEducator has announced iLiveMath Ford Cars 3.0, which celebrates over 100 years of auto history from the Ford Model T to today’s Ford Fusion, Edge, and concept cars. The $2.99 app introduces problem-based math concepts including mean, median, mode, and range. The app was made possible through Ford Motor Company to help students build confidence with problem-based learning.

dBelement has released Noter2 for iPad, a $2.99 app to organize and sync all of your notes. You ca organize your list notes in any way you want and sync your to-do lists between your iPad, iPhone and desktop computer.

Vadique has introduced Lighted Mirror 4.0 for the iPhone 4. The US$0.99 app takes advantage of the front facing camera and turns it into a pocket mirror. It allows users to take a look at their own reflection in the lighted mirror.

Global Delight has unveiled Camera Plus Pro 2.5, an update to their $0.99 photography app for the iPhone and iPod touch. Version 2.5 includes a new Wi-fi sharing feature, Bing image search, and full integration with the iPhone 4’s LED flash and front facing camera, and more.

Mobilehead Games has updated Robin Hood: Hero of Hope for iPhone users to versioin 1.1. In the$1.99 app, users are put in the role of Robin Hood, the one counted on to save damsels in distress and put bad guys in their place. Features include an over-the-shoulder view with point and shoot capabilities, as well as funny character voiceovers.

Genera has developed Kids Song Machine 1.2.1 for the iPhone and iPod touch. It’s a $1.99 app centered on music, specifically for young children. It uses rhythm and song to provide a sensory environment. Parents can help their children on the go or between tasks.

MaxNick has released Box Battle 1.0.1, a $1.99 physics based puzzle game for the iPhone and iPad. Operating an advanced, steam-powered artillery cannon, players apply a mix of cunning, precision shooting, and brute force to blast their way through 130 industrially themed puzzles.

Mac OS X and iOS both on a Mac? 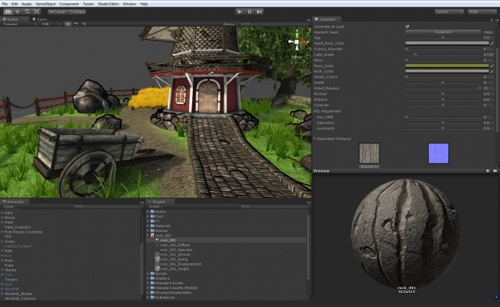