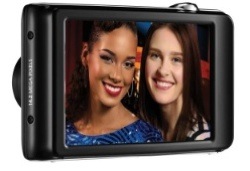 The cameras come equipped with Schneider Kreuznach lenses supported by Optical and Digital Image Stabilizations. The ST600 combines a 27mm wide-angle focal length with a 5x optical zoom, while the ST100 is the first Samsung DualView digital camera to feature an internal, 5x optical zoom.

Additional features offered by the cameras’ front LCD screens include a self-portrait mode, a couples mode which will automatically snap a photo when it detects two faces tilted toward each other, a children’s setting which will play a cartoon animation with sound to encourage young ones to smile for the camera, and a self-timer which provides a visual countdown so that everyone posing for a photo knows exactly when to smile.

The newest feature incorporated into the front LCD screen is Samsung’s jump shot mode. When set to jump shot mode, the front LCD will provide a visual queue to those in front of the camera to jump in unison, and immediately trigger the ST600 or ST100 to take three consecutive images to help users capture an image that essentially freezes their subjects in mid-air.

The ST600 and ST100 also incorporate Samsung’s Smart Gesture User Interface (UI), which allows for the quick access and use of key features with either a simple tilt or a hand gesture. Users can scroll through photos by slightly tilting the device in either direction, swiping their finger across the screen, or by selecting the appropriate photos for a slide show.

Samsung has also announced the announced the PL200, a14.2 megapixel point-and-shoot digital camera. It’s also due in September and will cost $179.99.