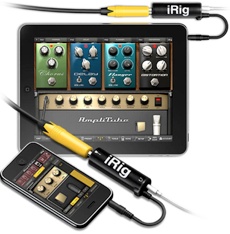 IK Multimedia is pleased to announce that the US$39.99 iRig guitar and bass interface adapter (http://www.amplitube.com/irig) for iPhone, iPod Touch and iPad is now shipping worldwide.

The new iRig interface allows guitar and bass players to plug their instruments directly into the headphone/microphone input jack on their mobile Apple device and access AmpliTube for iPhone. Combined with the AmpliTube for iPhone app range — available in free, LE and full versions at the Apple App Store — the iRig interface adapter allows everyone to plug their instrument into their iOS mobile device and play anywhere with real effects and amplifier tones.

In the app, your signal chain can consist of up to three simultaneous stompbox effects plus amplifier, cabinet and microphone, all reconfigurable. Additional Tuner, Metronome and Backing-Track player with loop-points allow for play and practice anytime, anywhere.

The iRig also works with any other recording, processing or tuning app. Plus, you can also use the iRig with line level signal sources such as synthesizers, keyboards or mixing consoles.