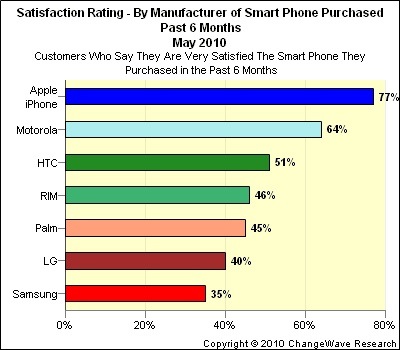 In a new ChangeWave (http://www.changewave.com) survey of 1,009 smartphone owners who have purchased their phone within the last six months, the iPhone topped the list in customer satisfaction.

Seventy-seven percent of new Apple owners said they were very satisfied with their purchase. Motorola came in second with 64% of their customers being very satisfied.

With rumors swirling about the release of a new iPhone that can be used on  Verizon’s and Sprint’s CDMA cellular network, ChangeWave asked respondents whether they’d have still purchased their new smart phone if the iPhone had been available at their cellular service provider at the time of purchase.

Nearly one-in-three new smart phone buyers (32%) say they’d have instead bought the iPhone if it had been available at their service provider. Another 29% said they don’t know what they would have done.