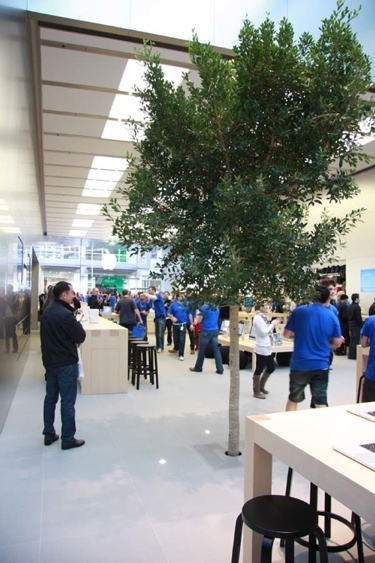 On a cold morning three days before the official first day of winter, Melbourne and its two Apple Retail Stores at Chadstone and Doncaster shopping malls provided a warm welcome for the international launch of Apple’s iPad for the retail customers who did not already order their iPads through the Apple Online Store.

The line of people waiting at the one-hour-earlier-than-normal opening of the store numbered over 250 buyers at the Chadstone store and over 230 buyers at the Doncaster store. One hour after opening people were still entering the queue that extended into the mall and numbered over 80 in each.

This was not a bad turnout, but the larger iPad numbers are in the courier deliveries for the device. “The Sydney Morning Herald” reported on a bulletin board commentator identifying himself as a driver for a large courier company operating in Australia (but perhaps not known so well outside the country) as having 7,800 iPad deliveries to make in the Sydney area today alone.

The black curtains were up on the external glass windows store in both Melbourne stores, shielding the internal preparations for the iPad launch as well as the meeting of all the Apple employees inside the store. Enthusiastic hoops and hollering were heard from behind the curtain from time to time in the hour before opening. With 15 minutes before opening the curtains came down. Just before the doors opened the Apple employees came out and ran around the long queue of buyers with more enthusiastic cheering.

We observed that customers were buying the limit of two iPads and never just one. The crowd was very diverse in nationality with a surprising high percentage of young Asian faces in it. There was a sprinkle of “suits” in the line as well. From past store observations and Apple Store employee directions six “designated” buyers for a South Asian syndicate of iPhones were in the queue. Sri Lanka, Pakistan and Bangladesh will have a few more iPads for sale soon.

Once the store doors opened, it was all store employees who were “hands on deck.” The business manager and geniuses were all still involved in handling iPad sales an hour after opening.

In related news the Bondi Apple Store in the south part of Sydney and closest to the waves at the famous Bondi Beach of Sydney opened its doors for the first time today. APC magazine has posted a “video” (http://apcmag.com/video-tour-of-the-new-bondi-junction-apple-store.htm) with its article that shows the the four trees inside near the back of the store. It is the seventh store for Australia and the third in the greater Sydney area.

Gary Allen, creator of the dedicated site on the Apple Stores coverage (ifoapplestore.com), was present for the opening and was quoted in an “Sydney Morning Herald” (http://www.smh.com.au/digital-life/tablets/crowds-flock-to-shop-as-ipad-goes-on-sale-20100528-wi87.html) article describing the last minute rush to finish to the store. It sounded like a dangerous night operation and, hopefully, the Apple Retail Store team for Australia will learn something about getting construction done here. Extra time always seems to be needed — and this opinion comes from personal experience.

Apple Australia’s web job site currently list job opportunities stores for Perth in Western Australia and another store in Sydney at Castle Towers in Castle Hill (western part of Sydney) and perhaps we can see them open this year. With the noticeably growing popularity of Apple products here, the sooner the better.