What’s the next game-changing consumer device?

What do connected cars, e-book readers, smartphones and HDTVs have in common? They have all been radically transformed by connectivity. And in the next decade, driven by both consumer demand and market opportunities, many more connected devices will emerge, according to a new report by the Yankee Group (http://www.yankeegroup.com).

Data from Yankee Group’s Anywhere Consumer: 2009 U.S. Survey indicates that 55% of consumers highly value connectivity in e-book readers, 50% in MP3 players and 40% in HDTVs. But how can device makers distinguish the next big thing from the also-rans? Yankee Group’s new model evaluates 16 CE devices against 10 business and connectivity attributes, and groups the devices into three segments:

° Anywhere Target Devices, like e-book readers and HDTVs, have the most untapped potential.

° Anywhere Impaired Devices, like game consoles, digital cameras and portable navigation devices, have only a marginal capacity to innovate.

° The key for device makers is focusing on the right attributes. “Anywhere Target Devices tend to have two important features: integrated WAN connectivity and robust developer communities,” explains Dmitriy Molchanov, analyst at Yankee Group and author of the report. “Devices with similar features are destined to be the next game-changers.”

° New Anywhere Target Devices are already hitting the market. CE makers understand the link between connectivity and profit, and are designing products accordingly.

° Older devices are being swallowed up. Anywhere Has-Beens are quickly being integrated into newer connected products such as smartphones and connected cars, creating new revenue streams.

° Portability does not mean connectivity. In-home game consoles, with their online communities and advertising capabilities, demonstrate more potential than their portable counterparts. 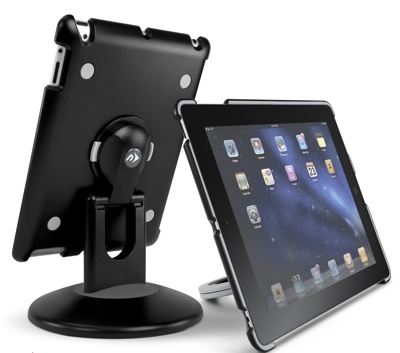 GripStand 3 available for the new iPad