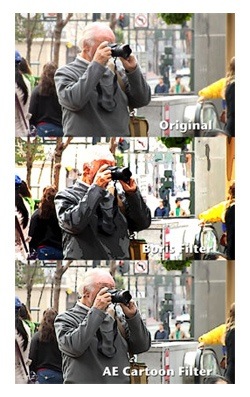 Everywhere you turn, you’ll spot the “look”: video footage transformed to look like a cartoon. In a traditional workflow, the process involves rotoscoping. An artist literally traces animation frame by frame over the original source.

The technique was invented by Max Fleischer around 1915, and has been used by animators on classic films such as “Snow White and the Seven Dwarves” and “Cinderella,” as well as modern movies such as “Titan A.E.” and “Waking Life.” The process is very tedious, however, so many video pros and motion graphics artists have been on a quest for an easier solution. These days you’ll find several products on the market to transform your video footage to look like it’s a cartoon. Early options such as Studio Artist (US$379; http://www.synthetik.com) and market leaders like ToonIt ($399; http://www.redgiantsoftware.com) have all seen heavy use.

While they’re not new to the plug-in market, Boris FX (http://www.borisfx.com) has released their own take on cartoon filters. The Boris Continuum Unit: Cartoon Look breaks out four filters from the larger plug-in package Continuum Complete. The set is only $199 (significantly less than competitors) and runs in several host applications including Adobe After Effects and Premiere Pro, as well as Apple Final Cut Pro and Motion. The four filters for stylizing your footage include:

° BCC Cartoon Look: This filter attempts to simulate the look of rotoscoped animation. The original colors are preserved and the edges thickened.

° BCC Pencil Sketch: The filter does a reasonable job of emulating the look of a hand-drawn, pencil-sketched image. Edges are enhanced, but most color is reduced or removed.

° BCC Charcoal Sketch: This filter quickly simulates the thick strokes of a charcoal sketch. The resulting animation is drawn with thick black-and-white lines.

° BCC Watercolor: Watercolor paint-style animation is created with this filter. These are typified by soft edges and intensified color.

For our testing, the effects were run under After Effects CS4. So the question is simple: Is it worth it? The answer is it truly depends.

First off, you’ll either love or hate the cartoon filter look as a whole. The look is very trendy and your clients may be asking for it. On the other hand, none of the filters on the market match the quality of hand-drawn animation.  The filter offers precise controls with numerous options. What’s nice is the ability to blend the stylized image with the original, as well as control the thickness of lines.

While the effects offer presets, they don’t load with the standard Adobe preset picker. The quality of presets also varies.

The filter does render relatively quickly on modern computers. It also does a nice job of preserving edge details so the “drawn” lines don’t jitter or suddenly disappear.

After Effects CS4 already includes a very versatile Cartoon filter. While its controls don’t match the Boris filter, the price to upgrade to CS4 is only a little more and offers many more advantages.

ToonIt from Red Giant Software seems to offer solid results and is worth a head-to-head comparison for the serious buyer. Be sure to download the trials for each package and see which you find more intuitive and eye-pleasing.

The Mac can be Apple’s ‘game console’