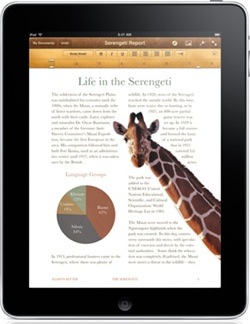 As I wind up my four-part review of the iPad, I must revisit my theory (or maybe it was a hope) that the device could replace both my iPod touch and my MacBook. It will definitely replace the former. As for my laptop, not quite and not yet.

With the revealing of iPhone OS 4, I think the iPad could do just that before year’s end. I say this with a caveat: I’m not a road warrior. I do most of my computing on an iMac and will be using my iPad as a Mac companion/Mac complement. If you do a lot of work — or heavy duty work — on your laptop, don’t plan on trading your MacBook or MacBook Pro in for an iPad.

As I’ve said before, the tablet device is a great device for media consumption. As a device for creation and productivity, it has a way to go.

Apple offers iPad versions of its iWork productivity apps: Pages, Keynote and Numbers for $9.99 each. I’ve only used Pages, so I’ll use that as my yardstick for getting work done on the tablet device.

First of all, I simply can’t use the virtual keyboard that comes with the iPad. Or, rather, I can’t use it quickly. Without the tactile feedback from a physical keyboard, I have to look at the keyboard while I type. That’s not conducive to writing articles as I do, though it’s okay for responding to email and posting short blips on Facebook.

Also, if you’re used to the iPhone keyboard, you’ll need some adjustment time for that of the iPad. On the iPhone, the Delete key is on the lower right, above the Return key. On the iPad, it’s in the upper right corner, and the Return key is next to the L key. The iPad adds a right-side Shift key.

However, with Apple’s US$70 iPad Keyboard Dock or a Bluetooth keyboard, I can write just as quickly and intuitively as I can using Pages on my iMac or MacBook. I love the Keyboard Dock and, though you can use it okay with a lapdesk, its size makes it awkward to put in a carrying bag. If you plan to be writing while on the go, I’d recommend a case that lets you prop up the iPad and a Bluetooth keyboard. I have an Apple Bluetooth keyboard. It paired with the iPad instantly and worked seamlessly. There was zero delay in the interaction between the keyboard and text popping up onscreen.

As an online tech journalist, I’m constantly moving info between emails, Pages and Safari (where I post articles for this web site). Currently, that’s a pain with the iPad. I must copy the info from one app (say, Pages, where I’ve written an article), quit it, then open another (such as Safari, where I post stories via a content management system). When I get ready to finish or edit another article, I have to quit Safari, open Pages and start the process over. iPhone OS 4’s multi-tasking should alleviate this problem, but right now my workflow is much more seamless on my Macs.

Still, I”m not ready to give up my laptop yet for this reason.

Others have complained about the lack of a camera and USB ports on the iPad. I’m betting we’ll get a camera (and iChat) on the next rev of the device. As for the lack of USB ports, considering the minimalist approach Apple was going for, this makes sense. But it’s another reason why you need a Mac in addition to an iPad.

Speaking of Pages, overall, it’s a credible take on a word processor/text editor for a new breed of device. Plus, Pages documents can be attached to e-mails as Word docs. They, in turn, can be downloaded from the e-mail program, opened in Apple software, edited, and re-attached to e-mails with changes intact. There will be some formatting snafus, but, overall, it works pretty well.

You also need to keep in mind that the iWork apps have no Save command. Documents are auto-saved every 30 seconds. There’s an Undo command, but if you get carried away and make lots of changes, you may be not be able to revert back to an earlier version of a document. What’s more, file sharing via Pages (and, I’d suspect, Keynote and Numbers) on the iPad is a hassle.

As Mac guru Ted Landau has noted, the feature works, but not with the sort of user interface that we’ve come to expect from Apple. Ted has offered a thorough look at what file sharing entails; you can read all about it here: http://www.macobserver.com/tmo/article/file_sharing_with_an_ipad_ugh/ . He recommends that “for starters, Apple could permit iPad apps to both export documents to and import documents from a MobileMe iDisk. This would make it much easier to shuttle files back and forth between a Mac and an iPad.” Amen, brother.

So should you buy an iPad? I have no trouble recommending it as a Mac companion. I don’t recommend it as a Mac replacement.

When it comes to ratings, I’d give it 9 out of 10 as a media consuming device, but only 5 out of town for content creation. We’ll revisit this again when iPhone OS 4 arrives for the iPad this fall. 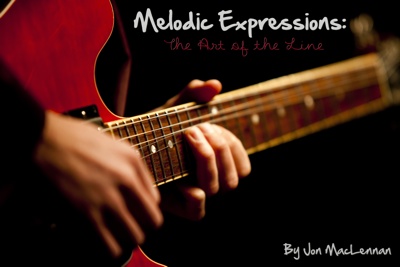 ‘Melodic Expressions: The Art Of The Line’ comes to iBookstore