With the advent of the CMOS photosensor, a whole range of consumer, prosumer and professional level, HD video capable camcorders and digital SLRs have been released. But, even though CMOS technology enables high quality products to be developed at cheaper and cheaper prices, has its own problems. One of the main issues when shooting video on a CMOS camera are rolling shutter artifacts.

When a CMOS sensor records an image, it scans the image from top to bottom, left to right. This scanning action results in a slight lag time between the recording of the top left of the image, to the bottom right of the image, resulting in images with horizontal skew and vertical distortion. These distortions, when coupled with the motion of the camera, creates the infamous “wobbly” image effect attributed to CMOS cameras. This effect is heightened when shooting on cameras like Canon’s Legria and Sony’s HDR range of prosumer/consumer level camcorders.

Rolling shutter artifacts become more obvious after stabilizing, so CoreMelt has developed its own rolling shutter reduction feature, and will include it as a free addition to the Lock & Load video stabilization plug-in for Final Cut Pro, Final Cut Express, and Motion. 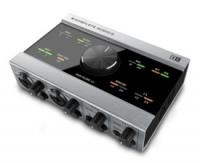