Namco has released Tinseltown Dreams: The 50s for the iPhone and iPod touch. The US$2.99 app is a Match 3 movie-making game that allows players to “create their very own box-office sensation.”

Spoonjuice has released new organizational app, Daily Deeds, for the iPhone and iPod touch. The $0.99 app lets users create a task list to carry with them on-the-go, and monitor accomplishments over time.

Good.iWare has released a new version of its $0.99 GoodReader file viewer for the iPhone that includes “server-style” support for DropBox. Now users can upload files and even entire directories to Dropbox from GoodReader, and are also able to delete files just like they could with a normal file server, such as FTP.

I-itch has introduced ABC Shakedown Plus 1.0, a follow-up to their first app, ABC Shakedown, for iPhone and iPod touch devices. The $1.99 app features three multi-sensory games designed to foster literacy by introducing and reinforcing letter recognition and letter sounds through interactive game play.

Kimchi Studios has presented Get Wise: Dangerous Quotes edition for the iPhone and iPod touch. The $0.99 app contains 25,000-plus quotes by famous people on over 160 topics.

TimeStream Software is offering free downloads of its new “Alice’s Adventures in Wonderland” Notescast for the iPod classic, iPod nano and iPod video. Available as a free download for a limited time, it’s the classic tale of Alice’s journey down the rabbit hole.

Electric Pocket has announced an iPhone version of BugMe!, a $0.99 note-taker and reminder app. It lets users jot quick notes and doodles — with their finger as the pen — just like a digital sticky note.

288 Vroom LLC has unveiled 100 Horror Stories And Sounds 2.0 for iPhone and iPod touch. The $0.99 app lets you read 100 t horror stories of all time and immerse yourself in the terror with 20 disturbing sounds and animations — and a few extra surprises. Version 2.0 has a new haunting feature called Auto-Scare.

TimeStream Software has launched Disneyland Park Guide 2.0, an update of its $2.99 Notescast for iPhone and iPod touch. It sports over 130 pages and more than 300 new photos showcasing Disneyland Park and the nearby Disneyland Hotels.

Kode80 has shipped HoloToy 1.0.1, an update to its $0.99 3D technology app for the iPhone and iPod touch. Version 1.01 introduces a remote controlled, user customizable robot that exists inside the virtual 3D space created by the HoloToy. HoloToy works by distorting the 3D scenes displayed on screen in a way our brains would expect based on the current angle of the device, all in real time.

Clever Coding has hatched iColor Easter Eggs, the latest update to their $1.99 holiday app for iPhone and iPod touch devices. It’s been completely revamped, adding new features, as well overhauling the graphics for the entire app. Users are able to choose one of six custom egg designs. From the designs they are able to color the eggs in any way they would like. After color the eggs, users can pick one of 18 colorful backgrounds for their picture. 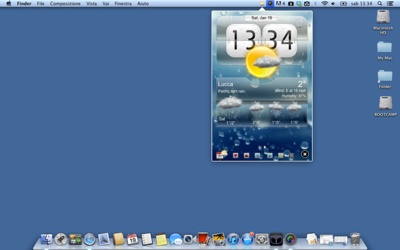 Belkin rolls out slew of products at CES