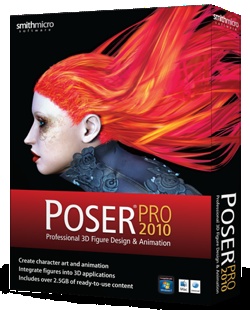 Smith Micro has launched Poser Pro 2010, an update of the Mac OS X compatible (10.4 and higher) tool that lets professional artists and production teams add 3D characters to their projects. It sports over 2.5GB of ready-to-use content such as pre-rigged, fully textured 3D characters.

° A revamped user interface with a user configurable work environment;

° A new tool that allows artists to create, modify and edit master parameters within the scene. Complex interactions can be created, such as full- and partial-body morphs, advanced body controls and parameter-controlled scene assets;

° A Tone Mapping and Exposure that helps artists control bright or dark areas within an image to produce higher-quality, final renderings with better contrast;

° A Wardrobe Wizard that allows artists to re-use existing clothing assets by fitting them to the new Poser 8 character set;

The manufacturer’s suggested retail price for Poser Pro 2010 is US$499.99 with upgrades from the previous version of Poser Pro priced at $199.99. Users that have purchased both a license for Poser 8and for Poser Pro can upgrade to Poser Pro 2010 for $50 by March 31.  On April, this upgrade price will increase to $70.