Eye-Fi (http://www.eye.fi), makers of the a
wireless memory card for digital cameras, has
announced enhancements to its family of Eye-Fi
cards that will purportedly make the upload of
digital photos from camera to computer twice as
fast. The faster wireless speeds will also be
made available to existing Eye-Fi users at no
extra cost.

In addition, users will be able to upgrade their
Eye-Fi cards to add the individual services they
want, including web sharing, geotagging and
hotspot access, says Jef Holove, CEO of Eye-Fi.
Beginning Oct. 5, new and existing Eye-Fi card
owners can add features that aren’t already
included on their cards and renew annual
services. By using the updated Eye-Fi Manager
Web application, users can add the following
services to their cards:

° Web sharing — Users who have an Eye-Fi Home
card can add Eye-Fi’s web sharing service to send
photos directly from their camera to one of more
than 20 online photo sharing, printing, social
networking or blogging sites using a wireless
network, saving the time and hassle of manually
uploading from the computer. The annual service
fee is US$9.99.

° Geotagging — Users who have an Eye-Fi Home or
Share card can add geotagging to their card.
Geotagging invisibly adds geographic information
indicating where the photo was taken, allowing
users to map where their memories were captured.
The annual service fee is $14.99.

° Hotspot access — Users who have an Eye-Fi
Share card can upgrade their card to
automatically upload photos away from home at
more than 10,000 Wayport hotspots and through
open hotspots.The annual service fee is $14.99.

Also announced today, Eye-Fi users will be able
to upload photos directly to one of two new
online photo destinations: Apple’s MobileMe and
AdoramaPix. MobileMe members can wirelessly send
photos from their camera directly to their
MobileMe Gallery, which can then be viewed by
friends and family on the Web, iPhone, iPod touch
and Apple TV. Available now, users will also be
able to upload photos directly from their camera
to their AdoramaPix account, where they can edit,
share and make prints. 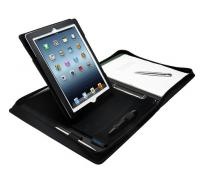 Folio Trio Mobile Workstation for the iPad has almost everything