Wingspan today announced it has added the ability to copy a DVD to an iPod or iPhone feature to its iLoad device. iLoad can transfer either the entire DVD or CD or the tracks of the user’s choice as well as the album and track information directly to the iPod without using a computer, iTunes or Internet connection. “Simply plug the iPod into iLoad, insert a DVD or CD, and press the GO button, eliminating the computer “middleman.” Copying speed for CDs is typically eight minutes per CD, or five times faster than the actual CD playing time, roughly the same as the average PC transfer but without hassle of booting and filling-up your computer just to get your music onto an iPod. DVD transfer is actually faster than using a computer. The typical DVD transfer takes 2.5 times the actual playing time to transfer to the iPod. iLoad is compatible with all USB iPods made since 2002, including the shuffle, nano, Video iPod and forthcoming iPhone. The DVD to iPod feature is a free upgrade to registered iLoad customers. iLoad is priced at US$299.95.

QuickBooks 2010 for Mac falls short of its Windows counterpart 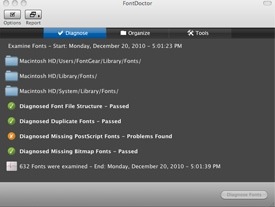 FontDoctor 8 is in the house