Analysts said they expect Apple’s new GarageBand music creation software to greatly benefit sales of Macs in the coming year. “You look at an application like GarageBand — you can’t get that on another platform at any price,” said Michael Gartenberg of Jupiter Media. “People will buy Macs on the basis of GarageBand.” Tim Bajarin, an analyst with market research firm Creative Strategies, also thinks the same. “GarageBand might even have more long-term effect on Apple’s sales [than the new iPod mini],” Bajarin said. “Steve has taken the consumer application layer to its next level from playing music to allowing you to be part of making music.” 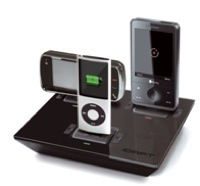 IDAPT i4 now compatible with the iPad, iPhone 4