Next week’s Macworld Conference & Expo New York will be the largest ever, occupying nearly 100,000 net square feet of exhibit space and featuring 250 exhibitors, IDG World Expo announced today. It’s unclear, however, what criteria IDG is using to determine that the upcoming show will be the largest ever — the 2000 Expo attracted about 400 exhibitors who occupied 280,000 square feet of space. In addition, some heavyweights have opted to forgo the Expo this year, including Adobe, Bare Bones, Corel, Macromedia, and Symantec. Today’s press release also highlights some of the new products that will be on display, as well as presentations and other high points. Updated (11:45) – IDG has informed us that the “largest ever” claim is based on net square footage, or actual booth space on the show floor, not the show floor as a whole. The 2000 Expo featured 82,000 net square feet of booth space. While this year’s Expo features fewer exhibitors, they will be occupying more booth space. 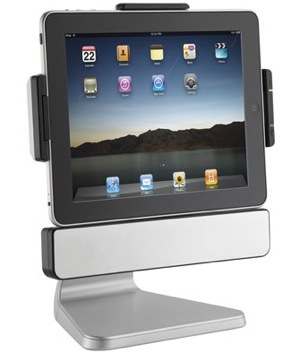 PadDock 10 is stereo sound system for the iPad