Saratoga, California – May 20, 1998 — Microspot, longtime 3D developer,
today announced the Microspot 3D World Developer Partner Program. Many
application developers could enhance their products by including 3D, but
this is a challenging and time consuming task. Microspot is now offering
developers, who join the Microspot 3D World Developer Partner Program,
access to 3D World 3.0 as a solution for Windows and Macintosh applications
. Through this program a developer may license code which is based upon
Microspot’s 3D World 3.0 due for release in July 1998.

3D World is designed as a completely modular 3D modeling and animation
application. It is comprised of an application shell, and a shared library
(which acts as a C++ wrapper to QuickDraw 3D, and provides numerous utility
routines to aid development), functionality is add by way of plug-ins
Microspot has written over 100 plug-ins which range from import and export
to modeling to animation and navigation. Being based on QuickDraw 3D
enables 3D World to make use of high end QD3D plug-in renders like those
from LightWork Design. (See www.diamondschmitt.com/beta4.html for examples
of how a renowned architect uses 3D World and LightWorks to produce awesome
renderings of proposed buildings).

Microspot is making available for license the 3D World Plug-in API,
Application API, Shared Library API, and C++ headers. Developers can
license all or some of these components to write their own 3D world
plug-ins, 3D applications or to integrate 3D into their existing
applications. This enables them to address their own vertical markets and
include their own content

This gives developers the ability to focus on their strengths, which are
the application area that they are addressing and content creation, not on
the technology of 3D. said Robert Coulling, President of Microspot. This
will dramatically reduce their development time.

Currently, there are four levels in the DPP program. Depending on the level
at which developers join, they will receive technical support help and a
large number of plug-ins to bundle with their application. Developers will
be able to include a Powered by 3D World logo on their box, so their
users will recognize the technology that the product is based upon.

Being based on QuickDraw 3D, which in now part of QuickTime 3.0, gives
potential developers a very large user base to market to. said Ted Scott,
Marketing Manager for Microspot USA. QuickTime is on virtually every
Macintosh, and is now bundled with many name-brand PCs. Its even one of
Apple’s hottest internet downloads.

Microspot was founded in 1964 and has been developing software applications
and drivers for the Personal Computer market since 1980. Its most recent
offering is a line of Postscript RIP’s for the Windows platform which
supports Windows and Macintosh based clients. Microspot is the market
leader in large format printer drivers for the Macintosh and they are now
using this expertise to develop products for the Windows platform.
Microspot’s application line up includes 2D Drafting, 3D Modeling and Photo
Editing. Products are distributed worldwide and are available in most
languages. Microspot products are bundled by many popular printer, scanner
and digital camera manufacturers. The company has offices in the U.S. and
U.K. Visit the Microspot web site at www.microspot.com or call
1-408-253-2000 for more details.
Contact:
Ted Scott
Marketing Manager
Microspot USA Inc.
Tel: 408-253-2000
Fax: 408-253-2055
E-Mail: tscott@microspot.com 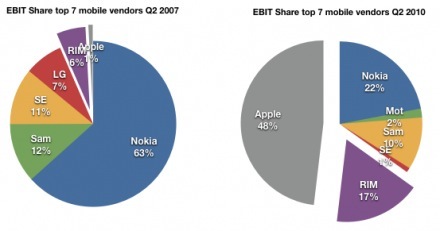 Apple has 48% of worldwide mobile market earnings in second quarter