Due to high traffic on MacDev-1 and to conserve your mailbox space, the
following releases have been combined in this message:

Full text of each of these announcements is below. Each announcement
stands on its own and doesn’t indicate any relation between companies or
products.

NeXT has started to make their programmer documentation available on the
web for downloading. Currently, they have the following documents online
(with more to come shortly0:

These documents are html/pdf based so you will need Acrobat reader to
view online.

Of course, Rhapsody is going to be a merger of OpenStep and current Mac
OS technologies. These documents do not cover this merger. But all-in-all
they are a great start on getting up to speed on OpenStep and the rest of
the NeXT technologies.

Also, we are giving you an Objective-C Language guide, but working with
Metrowerks we are going to make it possible for you to use OpenStep from
C++, Java, Object Pascal, and Objective-C. So don’t worry!

Hagenberg, AUSTRIA, January-14-1997. UNI SOFTWARE PLUS today announced
that the new version 1.8 of its popular version control tool VOODOO will
be released soon. In order to bring the new features to the customers
as soon as possible UNI SOFTWARE PLUS further announced the immediate
availability of a full functional free pre-release of VOODOO 1.8.
This version is available for download from:
http://www.unisoft.co.at/e/products/voodoo.html

The most interesting new features of VOODOO 1.8 are:
* Support of AppleEvents and AppleScript
* Smooth integration into Metrowerks’ CodeWarrior IDE such
that version control functions can now be performed
directly from inside the IDE.
* Comparison of files of different types (not only text files)
* Significantly improved efficiency on many places
* Improved handling of local file paths
* Many other improvements and some bug fixes.

“One of VOODOO’s great advantages always was its ease of use.
The easy-to-use graphical user interface makes VOODOO suitable
not only for programming projects but for projects of any kind.
The new version supports Metrowerks’ version control interface
and thus can be smoothly integrated into the CodeWarrior IDE.
Now users may choose whether they want to perform their version
control tasks directly from inside the CodeWarrior IDE or
whether they want to use the graphical project browser
(the VOODOO stand-alone application). This is a further step
in making version control not only feasible but pleasant.”
said Christoph Reichenberger, VOODOO product manager,
UNI SOFTWARE PLUS.

Another unique feature of VOODOO is its amazing delta
storage of arbitrary files with space savings of 95% and more.
In version 1.8 the delta generation process has been improved again
and is much faster now. Besides that, the new version
supports even the comparison of files of different types.
Right now VOODOO can display the differences of text files,
MS Word files and resource files using different helper
applications. Other file types will follow.

1.8 Pre-Release:
================
A pre-release of VOODOO 1.8 available for download from:
http://www.unisoft.co.at/e/products/voodoo.html
This pre-release is intended for demonstrating many of the new features of
v 1.8. It will never be sold but can be freely used by anybody for
evaluation purposes – to get a feeling of the great new features the new
version of VOODOO will offer. The pre-release will expire on 30. April 1997.
At that time, the final version will be available.
While the unregistered version offers full functionality on
projects not older than 3 months, registered versions are
fully functional until the expiring date. This allows existing
customers to start working with the new version immediately.
Registered customers will be informed on upgrade paths in time.

Pricing and Availability:
=========================
VOODOO 1.7 is available from UNI SOFTWARE PLUS and selected
retailers for a suggested price of US$229. Academic prices
as well as special prices for multiple licenses are available.
Customers who buy VOODOO 1.7 now can start to work with
the pre-release and will get a free electronic update to
version 1.8.

More information as well as a free demo version may be obtained from
(http://www.unisoft.co.at/e/products/voodoo.html)
as well as by sending mail to (mailto:voodoo@unisoft.co.at).

For Newcomers – What is VOODOO?
===============================
VOODOO (Versions Of Outdated Documents Organized Orthogonally)
is a stand-alone version control tool with a neat graphical user
interface offering many features for the simple and clear management
of projects in which files evolve in numerous versions. The tool
manages not only variants and revisions of single files,
but of whole software projects (multiple files, multiple users,
multiple variants, access rights, project structure,
project history, etc.).

VOODOO differs from previous source code control systems in its
orthogonal approach to version management. This means that for
every component of a project hierarchy you can not only store
its revision history but also different variants of the same
component. The orthogonal organization of revisions and
variants leads to a much clearer organization than with other
tools which use trees for organizing variants and revisions.

VOODOO uses delta storage for storing the different versions with
savings of about 95% (up to 99%). It is not restricted to text files
but also handles files of arbitrary type (desktop publishing documents,
databases, libraries, applications, etc.)

VOODOO proves suitable for projects of any size, small (one developer)
to large (many developers). A flexible locking mechanism ensures
data integrity when several developers work on the same project.

VOODOO At A Glance:
* Clear organization of variants and revisions
* Efficient delta storage of arbitrary (text as well as non-text)
documents (about 95 % savings)
* View differences of files of different types (not only text-files)
* Management of users and access rights
* Management of versions of components as well as versions
of the project structure
* Neat graphical user interface, Scriptable, CodeWarrior integration
* Easy to use

Available immediately in both PowerPC and 68K versions, AG Author is
designed to support Apple Guide developers in three key areas. First, AG
Author automatically manages all Apple Guide media, including external
media such as images and resources, thus making it significantly easier
for developers to organize a complex Apple Guide project. Second, AG
Author incorporates a number of features that allow for the rapid
deployment of project globals and the creation of definition libraries
of Apple Guide media. Third, AG Author supports all of the scripting
options and parameters of Apple Guide. Developers who choose AG Author
can be assured that they are not sacrificing functionality for ease of
use.

“With this release, Lakewood Software is responding to the needs of
experienced Apple Guide developers who, until now, have had no
development tool to turn to for their Apple Guide requirements,”
explained David Hutchison, the developer of AG Author. “AG Author’s
ability to seamlessly manage the various components of an Apple Guide
project will appeal to both novice and experienced users alike.”

In addition to the above features, the defaults for virtually any
element of an Apple Guide project can be customized using the AG Author
project template. As well as setting the defaults for project globals,
developers can maintain a default definition library of Apple Guide
elements that are automatically available to all new projects.

Other features include: a WYSIWYG List Manager, flexible compile
options, a find & replace tool for scripts, and integrated support for
styled and colored text.

A compile-disabled version of AG Author is available for immediate
download from the Lakewood Software web site at
http://www.lakewoodsoftware.com. AG Author is competitively priced at
$99.00 (U.S.). Until February 14, 1997, AG Author can be purchased for
the special introductory price of $79.00 (U.S.). Site licenses and
educational pricing are also available.

Santa Barbara, CA, January 7, 1997. Tenon Intersystems has extended MachTen
– its highly-regarded UNIX system for Apple computers – to include the
Objective-C and the GNAT-Ada 95 tool suite. MachTen CodeBuilder, a new
offering from Tenon being demonstrated this week at Macworld in San
Francisco, includes C, C++, Objective-C, Java, Ada95 and Fortran77.
CodeBuilder can be used in combination with standard Macintosh editors and
compilers to develop Macintosh applications, X applications, and UNIX
applications.

MachTen CodeBuilder extends MacOS with a family of dynamically-linked,
shared libraries that, like a Java virtual machine, create a UNIX virtual
machine-based execution environment with pre-emptive multi-tasking. Tenon’s
MachTen UNIX is based on the same Carnegie Mellon Mach and BSD UNIX
foundation as Steve Jobs’ NeXT OS, making CodeBuilder a good platform for
porting and building next-generation MacOS applications.

The native PowerPC (PPC) package contains a complete UNIX software
development environment with a source-level debugger and C, C++,
Objective-C, Ada95 and Fortran77 compilers all generating native PPC code.
Because CodeBuilder creates binary PowerPC Executable Format (PEF) files
that can integrate directly with other Macintosh development tools, software
developers can combine Macintosh debuggers and compilers with the
CodeBuilder tool suite to get the best of both the Macintosh and UNIX
worlds.

CodeBuilder is a powerful tool for porting existing UNIX applications or
developing new, advanced applications on Power Macs and Power Mac clones.
This unique toolset gives developers the ability to create an application
with a single source base not only for Power Macs under a native Apple
operating system, but also for Silicon Graphics, SUN, NeXT, or HP
environments. CodeBuilder gives Apple developers the freedom to take
advantage of time-tested UNIX development tools without giving up the
features of their favorite Macintosh editors or compilers.

Objective-C, an object-oriented extension to the C language, is the NeXTStep
development language. The GNUStep OpenStep base class library is included on
the CodeBuilder CD as a source code compilation example. GNUStep is a
widely-available implementation of OpenStep, the NeXT distributed
application run time environment. The fact that CodeBuilder’s Objective-C is
able to build and execute large sections of the GNUStep library demonstrates
the strength of CodeBuilder’s Objective-C implementation. A future release
of CodeBuilder will include the complete GNUStep environment.

CodeBuilder includes a high-performance X11R6 24-bit color X server as well
as an X client application development environment. The current release
supports AfterStep, a NeXT-style X desktop. Options for OpenGL and Motif 2.0
will be offered by the end of the first quarter of ’97, further
strengthening CodeBuilder’s X development capabilities.

The software comes on CD with BSD UNIX source code, on-line documentation in
both HTML and Adobe Acrobat PDF formats, and an introductory price of $99.

Tenon has been shipping UNIX, X , and networking software for the Macintosh
since 1991. In 1994 MachTen was selected by UNIX World’s Open Computing
magazine as “A Best Product of the Year”. 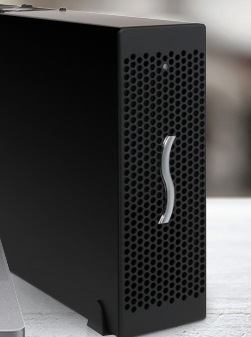