Edmonton, AB, December 9, 1996-Shana Corporation today announced that it
had shipped version 2.0 of its Informed electronic forms software. Among a
range of significant enhancements, this latest release of Informed
incorporates totally transparent cross-platform functionality between
Windows and Mac OS computers.

“Many of our customers who use Informed on Mac OS based systems have been
waiting for our Windows product,” said Don Murphy, President of Shana.
“They’ll find it was well worth the wait. Version 2.0 is unique since it
allows you to design forms on either Windows or the Mac OS and fill them
out on the platform of your choice as well.”

Informed 2.0 brings a broad range of added functionality and new
capabilities to the Informed solution:

– innovative licensing options that include standard volume purchase and
site licenses, along with individual flat-fee and transaction based
licenses for use on the Internet
– built-in routing lists provide the form user with suggested routes for
specific forms, with multiple platform routing, including support for
Microsoft Exchange, cc:Mail, Eudora, QuickMail and other popular e-mail
programs
– FTP servers can be designated as distribution centres to manage form
revisions, and make them available to forms users automatically when a old
version of a form is opened
– can be configured to look up or submit data from a range of popular
database programs, including Oracle, Sybase and ODBC-compliant databases
– support for attachments to a form: an Engineering Change Notice, for
example, could includes details of the change plus up-to-the -minute,
electronic copies of related engineering drawings
– several hundred additional features, updates and other changes to the
previous version of Informed.

“I have used Shana’s Informed electronic forms products for a number of
years, and I continue to be impressed with their work,” said Chuck Rogers,
Senior Evangelist with Apple Computer. “I am really looking forward to
using the new features and improved performance of Informed 2.0.”

Informed 2.0 also features enhanced security. Informed has supported
digital signatures for over two years, and was the first electronic forms
product to become Entrust-aware when it added support for Northern
Telecom’s Entrust(tm) product line in 1995. With Informed 2.0, a user can
not only sign the data on a form, but also sign the the actual design of
the form itself.

Informed also includes an HTTP plug-in that allows Informed Filler users to
fill out forms and instantly submit them back to a pre-configured web site,
anywhere in the world. “There is a real need for fully-functional forms
that take full advantage of the Internet,” said John Murphy, VP of Sales
and Marketing at Shana. “With Informed 2.0, Shana has succeeded in meeting
the needs of both intranet and internet forms users.”

“Privacy and authentication are key technologies in the evolution of
intranets,” said Brian O’Higgins, director of Secure Networks, Nortel, “and
Shana’s Informed product line fully supports these technologies in a truly
seamless, cross-platform environment. The combination of Entrust and Shana
is a powerful tool for moving vital forms data over intranets in a secure,
intelligent and effective way.”

For the intranet user, Informed supports standard protocols right from
within the software, eliminating the need to use web browsers just to fill
out a form. “This creates a virtual forms browser, and provides the
intranet forms user with fully-functional forms software, including support
for error checking, calculations, formatting and digital signatures,” said
John Murphy. “Browsers are great for looking at web pages but not so useful
for filling forms which is exactly what Informed is designed to do,” he
added.

For the internet user, Shana has addressed the issue of getting
fully-functional forms software to the end user, at no cost. “We have
developed the tools to enable our customers to distribute their forms –
complete with a copy of Informed Filler – free of charge to the general
public,” said Murphy.

Informed 2.0 consists of Informed Designer(r) and Informed Filler(tm),
which together include all the tools needed to develop a complete forms
system. Informed Designer provides a powerful and intuitive design
environment where a form’s built-in intelligence – including database
lookups, calculations, error-checking and digital signatures – can be
designed in from the beginning. Informed Filler is used to fill out and
process forms quickly by looking up data directly from company databases,
mailing across networks, signing with a secure digital signature and
ultimately submitting completed form data to a corporate database or
accounting system. And the process is entirely electronic, without ever
having to go to paper.

Informed Designer, which includes one copy of Informed Filler, has an SRP
of $US 295. Informed Filler, with a SRP of $195, can be licensed for as
little as pennies a copy, depending on the application.

Shana Corporation brings over 11 years of development and marketing
experience to its Informed electronic forms software, which is designed to
automate the ‘fill, sign and send’ forms process. Shana is a privately
owned company located in Edmonton, Alberta, Canada. 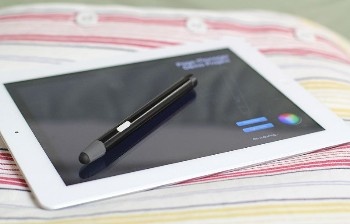 Ten One Design unveils Blue Tiger stylus for the iPad