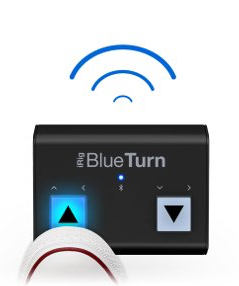 IK Multimedia’s iRig BlueTurn (irgblueturn.com) is a compact, foot-controlled backlit Bluetooth page turner for iPhone, iPad, Mac and Android devices. It’s a hands-free page turning foot pedal that features two backlit buttons that are visible in even the darkest of environments, making it an ideal companion on the stage.

The iRig BlueTurn transmits standard HID messages via Bluetooth low energy technology – a standard that works with IK’s own iKlip Stage set list management app for iPad and Android, as well as many other document viewing apps and software. iRig BlueTurn’s two buttons can be used in three different modes: Page Up/Page Down for page navigation, Arrow Up/Arrow Down for scrolling line by line and Arrow Left/Arrow Right for page turning.

It’s been made with the needs of performers in mind. Its two backlit soft-touch buttons provide an unobtrusive-yet-visible glow suitable for situations with a low amount of ambient light — which is great while performing on stage, in an orchestra pit or giving presentations with digital slideshows.

The iRig BlueTurn is also extremely portable. It has a compact enclosure with a small footprint that fits into a small bag or backpack. It runs on 2 AAA batteries and doesn’t have any wires or cables to tie it down.

iRig BlueTurn works fine on its own, but it can also be used with iKlip Xpand as a part of a full stage-ready set list management and page turning system. iKlip Xpand is a microphone stand mount for tablets with four expandable grips, a rubberized backing and a positionable ball joint design. It can be used to secure an iPad or Android tablet for use while performing with iRig BlueTurn. The new Tablet Page Turning Bundle featuring

The iRig BlueTurn is available from music and electronics retailers worldwide, and from the IK online store, for $69.99. iKlip Stage is a free app available for iPad and Android available on the Apple Store and Google Play Store. The IK Tablet Page Turner Bundle containing iRig BlueTurn and iKlip Xpand can be preordered for $99.99. 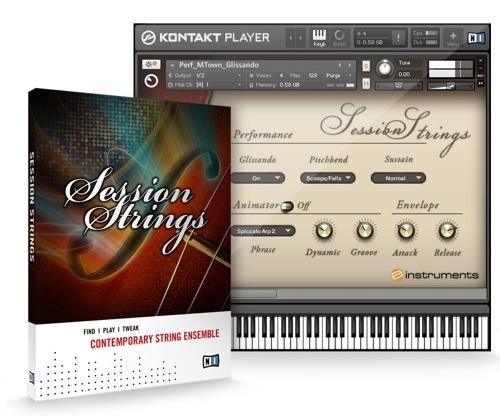